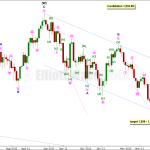 Gold is still within a large fourth wave correction at primary wave degree which is incomplete. It is now more likely to continue as a double combination because within it intermediate wave (X) should be deep.

If downwards movement reaches 1,205.74 or below then it would be 90% of the prior upwards movement labeled intermediate wave (W). At that stage I would relabel primary wave 4 as a flat correction, A-B-C rather than a combination W-X-Y.

There is no lower invalidation point for intermediate wave (X); X waves may make new price extremes beyond the start of W waves, and they may behave like B waves within flat corrections. For combinations X waves often end close to the start of W waves.

There are several ways to label this downwards wave of minute wave v so far. This labeling has the best fit.

The strongest downwards movement is the middle of the third wave. This wave count fits perfectly, so far, with MACD.

Minuette wave (iv) may not move into minuette wave (i) price territory. This wave count is invalidated with movement above 1,270.14.