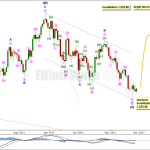 Yesterday’s analysis expected more upwards movement from Gold. Price has moved higher, but it is not a convincing third wave… yet.

*Edit: While price remains within the pink parallel channel on the daily chart, and above 1,234.68, then the main wave count and the first alternate have an even probability.

Gold is still within a large fourth wave correction at primary wave degree which is incomplete. It is unlikely that primary wave 4 was over at 1,433.83 as a single zigzag because it would have lasted only nine weeks. Its counterpart primary wave 2 lasted 53 weeks. This is too big a difference for the wave count to have the “right look”.

It is likely to continue as a double combination because within it intermediate wave (X) is reasonably deep. Double zigzags normally have more shallow X waves than this one is.

I have drawn a parallel channel about the zigzag of intermediate wave (X) using Elliott’s technique for a correction. Draw the first trend line from the start of minor wave A to the end of minor wave B. Place a parallel copy upon the end of minor wave A. Minor wave C may have ended slightly short of touching the lower edge of the channel. When this channel is finally breached by upwards movement then I would consider that final confirmation that intermediate wave (Y) is underway.

I have also drawn a parallel channel about minor wave C downwards using Elliott’s second technique. Draw the first trend line from the highs labeled minute waves ii and iv, place a parallel copy upon the low labeled minute wave iii. Confirmation of a trend change would come with a clear breach of this channel by upwards movement.

Price has moved higher as expected, but it is so far unconvincing as a third wave. It may be that with the USA closed for Thanksgiving holidays the markets are quiet, and the first wave within minuette wave (iii) may be a slow moving first wave.

Initially I would want to see movement above the pink parallel channel containing minor wave C downwards to have some confidence in a trend change.

Thereafter, movement above 1,255.01 would give further confidence in a trend change. At that stage upwards movement may not be a second wave correction within a continuing downwards trend.

Movement above 1,261.52 would give me full and final confidence in a trend change. At that stage the first alternate daily wave count below would be invalidated.

This alternate is mostly the same as the main wave count except it sees minute wave iii within minor wave C extending. At 1,206 minor wave C would reach equality in length with minor wave A.

Within the extending third wave of minute wave iii, minuette wave (iv) may not move into minuette wave (i) price territory. This alternate would be invalidated above 1,261.52.

If price moves above 1,261.52 then I would have full confidence in the main wave count, and I would expect that gold is in a new upwards trend to last for weeks.

This wave count agrees with MACD as it sees the strongest downwards momentum within a third wave. However, I have noticed with Gold that typical of commodities it sometimes has fifth waves which may be slightly stronger than third waves. Because this difference in momentum (indicated by the two horizontal lines in colour on MACD) is not very great I must state that it is inconclusive. Both wave counts fit.

At this stage today I must state that it is my opinion that the main wave count and this alternate have about an even probability. I will wait for confirmation of one and invalidation of the other before I get off the fence and again have a clear preference. Price will show us which wave count is correct, and it should do this within another couple of days.