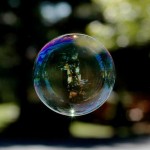 Are we in a bubble that’s about to pop? We’ll only know for sure if (when?) the sector pulls back.

In the meantime, you can prepare by looking for companies that might be worthy of an investment if they go on sale. Read on to see why our experts think Alnylam Pharmaceuticals , Celgene , and Biogen ; might fit the bill.

Brian Orelli : If the biotech sector crashes, you want to look for companies that have plenty of cash. Secondary offerings to raise capital when a stock is down are horrible for investors.

Consider two biotechs that are both worth $1 billion post-crash. One company has plenty of cash to run its next clinical trial, but the other needs to raise $100 million by selling shares at this deflated price. Both companies’ clinical trials are successful, and their market caps double to $2 billion.

Nightmare scenarios where companies have to raise 50% or more of their market cap because they had to raise capital after a crash can be disastrous for investors that buy ahead of the secondary offering, even if the company can prove its drug works.

The company raised $567 million through a secondary offering and concurrent selling of shares to its partner Sanofi in January, putting it with a little under $1.4 billion in its war chest. But Alnylam doesn’t really need the cash right now; management said it expects to have $1.2 billion in the bank at the end of this year.

Todd Campbell : What a run biotech stocks have had! Since 2013, the iShares Nasdaq Biotechnology ETF ;has returned 50%, trouncing the 16% return for the S&P 500. With returns like that, there’s no wonder people are getting bit nervous of a bubble bursting.

If it comes to that, then investors will be best served sticking with best-in-breed companies that have been there and done that, like ;Celgene.

Celgene’s proven track record for success includes Revlimid, a top-selling blood cancer drug with sales that could exceed $5.6 billion this year. Celgene has also successfully commercialized the pancreatic cancer drug Abraxane and the third-line multiple myeloma drug Pomalyst. Both of those drugs could achieve billion-dollar blockbuster status this year. Additionally, Celgene also branched out into autoimmune indications last year when it won FDA approval for its psoriasis drug Otezla.

Across all of its marketed drugs, Celgene expects its sales will climb 22.3% this year, to between $9 billion and $9.5 billion, and that its EPS will come in between $4.60 and $4.75, up 26% from last year. ;Importantly, Celgene doesn’t expect its sales momentum to slow. For instance, the company estimates its revenue will eclipse $13 billion in 2017. If it can deliver on that target, buying it if biotech stocks tumble could be a very smart move.

Dan Caplinger : I’d appreciate the chance to buy up shares of ;Biogen at a discount if the entire biotech sector got routed. Unlike most small biotechs, Biogen has hugely successful treatments that already have proven themselves as multibillion-dollar blockbusters, with most of them coming from the multiple sclerosis area. Between well-established drugs Tysabri and Avonex and the newer oral drug Tecfidera, Biogen has made itself a market leader in multiple sclerosis treatment.

Yet Biogen has recognized the danger of concentrating too heavily in one particular disease, and has therefore also worked at diversifying its product offering. The company has recently added a couple of hemophilia treatments to its stable of approved treatments, and further down the pipeline, promising experimental treatments for Alzheimer’s disease and acute optic neuritis could produce more blockbuster results if they pan out.

The biggest barrier to feeling good about Biogen is its share price, which has tripled since the beginning of 2013. Given its anticipated growth, though, shares don’t seem unreasonably priced, at roughly 21 times 2016 earnings. Still, if the entire biotech sector were to crash and bring the stock down along with it, Biogen would look awfully attractive given its portfolio of approved and experimental treatments.

This coming blockbuster will make every biotech jealous
The best biotech investors consistently reap gigantic profits by recognizing true potential earlier and more accurately than anyone else. Let me cut right to the chase. There is a product in development that could revolutionize not just how we treat a common chronic illness, but potentially the entire health industry. Analysts are already licking their chops at the sales potential. If you hope to outsmart Wall Street and realize multi-bagger returns, you will need to get in early — check out The Motley Fool’s new free report on the dream team responsible for this game-changing blockbuster. CLICK HERE NOW .

The article 3 Biotech Stocks to Buy If the Sector Crashes originally appeared on Fool.com.

Brian Orelli , Dan Caplinger , ;and Todd Campbell have no position in any stocks mentioned. (Yet.) The Motley Fool recommends Alnylam Pharmaceuticals and Celgene. Try any of our Foolish newsletter services free for 30 days . We Fools may not all hold the same opinions, but we all believe that considering a diverse range of insights makes us better investors. The Motley Fool has a disclosure policy .