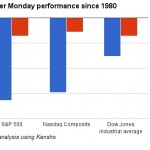 Markets are closed on Good Friday, and the Monday afterwards is historically the S&P 500’s worst post-holiday trading session. When the key monthly jobs report comes out on that Friday, stocks perform even more poorly.

More downward momentum will likely come from the March nonfarm payrolls report that showed an increase of just 126,000 jobs, far below Reuters’ expectations of 245,000.

Futures turned sharply negative, with the Dow futures off more than 160 points, after the data release.

Analysis using the quantitative tool Kensho showed the three major indices declined much more on Mondays following the release of jobs numbers on a Good Friday.

Investors increasingly focus on the monthly jobs report as a key indicator for the timing of a Federal Reserve interest rate hike.

While the jobs number is still open for revision, weakness in the bright spot of employment amid mostly weak U.S. data will likely push a rate increase further out, analysts said. For stocks, the relief of a delayed rate hike will be countered by existing concerns about disappointing earnings growth.

Stocks struggled for consensus in the days ahead of the jobs report on Good Friday. Only the futures market was open on Friday after the economic report came out at 8:30 a.m.

That leaves an entire day before investors can take action on the jobs report on Monday. Since European markets and most Asian exchanges are closed on Monday, U.S. markets will have little overseas movement to trade off.

“You might have a brief rally that means the Fed is going to hold (off), but probably the market is due for a big correction,” said Peter Cardillo, chief market economist at Rockwell Global Capital. “On Monday we’ll probably see a negative opening.”

Read MoreThe contrarian way to play the Fed’s next move

A rough Monday doesn’t spell doom for the entire week, however.

Stocks actually traded positive 70 percent of the time with a median gain of more than 0.70 percent, Kensho analysis showed.

Disclosure: CNBC’s parent NBCUniversal is a minority investor in Kensho.