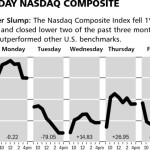 Every once in a while, technology still manages to surprise me.

Just minutes after finishing my

Your Value
Your Change

-sponsored fantasy football draft last week, the Web giant sent me a very personal e-mail. Yahoo (ticker: YHOO) had quickly analyzed my draft picks and prepared a grade. I got a B-, in what amounted to my worst showing since college Spanish. I remember contesting that Spanish grade, but it’s hard to argue with Yahoo. The mark was accompanied by hard data, wrapped in a smartly written report.

It turns out that my team, TommyJohn, is the oldest in the 10-team league I share with friends. My players have spent an average of 7.3 years playing in the National Football League, according to the analysis. (Not an ideal scenario when you consider that the average NFL career is less than seven years.) Yahoo summarized my draft like this: “Despite selecting in the top half of the first round, TommyJohn looks a little soft on paper.” Ouch.

If fantasy football sounds trivial, here’s where it gets more meaningful: The report cards are a product of Big Data, the much-hyped but obscure concept dominating conversations in Silicon Valley. For most fantasy players, the report card is probably their first real Big Data experience, which remains largely theoretical in day-to-day life.

Big Data, of course, has far bigger applications than fantasy football. Eventually, our location—determined by mobile phone GPS—will be combined with social-networking profiles and other personal data, all in real time, to create a kind of marketing nirvana.

“Big data really becomes actionable and obvious to the consumer when who you are, what you’re doing, and where you are are all being used,” says Jordan Rohan, who covers Internet stocks including Yahoo for Stifel Nicolaus. “We’re on the cusp of it.”

In the meantime, sports is already ripe for a Big Data-type incursion. Hoards of statistics—new and old—can be culled into new and meaningful insights. And fantasy football owners, a rather obsessive sort, have always looked for any edge in improving their teams.

“They have an almost insatiable appetite for information, research and detail,” says Ken Fuchs, the head of Yahoo Sports, which counts some 13 million fantasy players that spend an average of 29 hours a year on their teams.

Yahoo is using a start-up called Automated Insights to create its report cards. The Durham, N.C.-based firm looks for patterns, trends, and oddities in massive data packages and translates it all into plain English.

“Terms get bantered about and hyped,” says Scott Frederick, who’s the chief operating officer of Automated Insights. “Now it’s big data and the cloud, but people struggle to understand what it really means. How does it bring value? What I love about our technology is the ability to do personalization at the data level and turn it into narratives,” Frederick told me.

The firm began working with Yahoo’s fantasy group last year, but this is the first time they’re preparing draft reports, along with weekly game previews and recaps, all personalized for every fantasy owner. The company says it will deliver over 250 million personalized reports this season for Yahoo and other fantasy football partners. “We are able to generate and auto-publish over 1,000 a second,” Frederick says.

The processing power comes from the cloud. Automated Insights uses Amazon Web Services. “A few years ago this wouldn’t have been possible because the processing power that you need to generate these recaps is significant. But what we can do is spin it up for an hour or two and then spin it back down,” Frederick says, referring to Amazon’s rented computer power.

I spent at least 10 minutes on Yahoo’s site combing through my own fantasy report card, which also recommended still-available players who could plug my team’s now-apparent holes. That’s a long time with any personal e-mail, let alone one generated by a computer. Engagement, of course, is a key metric for advertisers. That’s surely not lost on Yahoo or its CEO, Marissa Mayer.

YAHOO SHARES ARE UP 73% since July 2012, when Mayer left Google to take on Yahoo’s challenging turnaround. Much of the praise for Mayer centers on things like improved apps, and her $1 billion acquisition of Tumblr, the social blogging site. Yahoo’s new Weather app is beautiful, no question, but I would argue that it’s a wave of content, like in the fantasy football report cards, that speaks to an even greater level of innovation.

In fact, Mayer outlined that thinking earlier this year at a Goldman Sachs investor conference. “I actually think that all of our experiences across desktop and mobile will ultimately become more personalized because at the core of Yahoo’s business is the ability to personalize content, bringing people the right information. But inside that content is also advertising.”

“That the ads and the content work together to really create a fantastic experience is what we’re really focused on,” Mayer added. “And that’s where I think the future lies.” Sure enough, my report card featured a Toyota ad that embedded the logo of a league-mate with the best draft performance.

Frederick, the COO of Automated Insights, concedes we’re still in the early first inning when it comes to Big Data’s real impact on consumers. “Data for data’s sake doesn’t create any value,” he says. “You need the insights and ability to decipher the insights.”

Automated Insights, with its natural language reports, is trying to be “that final mile of value for big data,” Frederick says. The firm was founded by a former Cisco engineer, Robbie Allen in 2007, as a new way to cover sports. Allen, who’s still CEO, originally called the company StatSheet. When Frederick arrived from a venture-capital firm in 2011, he worked with Allen to broaden the scope. “We realized we could do so much more than sports.” Today, the company is also providing personalized reports covering finance, real estate, health and fitness, and even corporate communications.

The start-up has raised a little over $5 million, thus far, and the payroll ranges from 20 to 30 employees. The small staff has its sights on big things. “We’ll produce basically more on a Tuesday morning than ESPN, CBS and FOX— the largest traditional media companies—will in a year, on sheer volume of stories,” Frederick says.

As both a journalist and someone struggling to win his fantasy football league, I’ll be paying careful attention.

Alexander Eule can be reached at [email protected], http://blogs.barrons.com/techtraderdaily, or www.twitter.com/barronstechblog