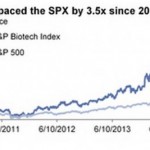 It is no secret that in recent weeks Goldman has been particular bearish (if only to the outside world), with statements such as the following by chief equity strategist David Kostin:

… by almost any measure, US equity valuations look expensive. The typical stock in the S&P 500 trades at 18.1x forward earnings, ranking at the 98th percentile of historical valuation since 1976. For the overall index, the aggregate forward P/E multiple equals 17.2x, a rise of 63% since September 2011, compared with the median expansion of 48% during 9 previous P/E expansion cycles. Financial metrics such as EV/EBITDA, EV/Sales, and P/B also suggest that US stocks have stretched valuations. With tightening on the horizon, the P/E expansion phase of the current bull market is behind us.”

So with the firm not expecting much if any stock market upside at this point, all else equal, it is only logical that it must be expecting downside. Or so it would like its clients to believe.

Which is perhaps why this afternoon, the 200 West firm with alumni manning every single central bank of relevance, released a note covering what are the three biggest market concerns, i.e., bubbles, and how Goldman is hedging them, or as Goldman puts it, the “what if” scenarios. To wit:

In today’s report we examine several “what-if” scenarios on several key debates in the market with a focus on out of consensus ideas. Namely we ask 1.) How does one monetize a potential drawdown in Biotech. 2.) What stocks work better if the FED moves faster than expected? and 3.) What if China reforms don’t do the trick?

Said otherwise, Goldman is hedging the biotech bubble, the China crash, and the rate rumble. Here’s how.

Many investors we speak to are concerned about a pullback in Biotech. It is easy to see the underlying sources of concern given strong sector outperformance, negative FCF for smid-caps, and increasingly early stage IPOs. While there are many reasons to be optimistic (strong new product cycles, advances in I/O and gene therapy, M&A), there are potential headwinds on the horizon. S&P Biotech (SPSIBITR) is up 85% in the past year and has outperformed the SPXTR by 250% over the past 5 years. In 2014, there were 71 IPOs, up 90% from 2013 as Venture Capital accelerated exits. Excitement has pushed the median stock to 11.6x EV/sales despite 90% of the NBI being unprofitable.

Concerns that might have caused volatility in recent months:

How to Hedge: Buy XBI Dec 10% out-of-the-money puts for 5%. XBI puts (S&P biotech ETF) are attractive to hedge against a sell-off. XBI 3m implied volatility of 29% is near the lows vs. the past year, showing investors are complacent about risks. We prefer Dec XBI options as the XBI contains more smid-cap biotech and December options capture the critical fall conference season where data from recent trials is often made public. Put buyers risk losing their premium paid.

The timing and path of the Fed’s lift-off remains a key debate, with Fed Fund futures stall pricing in the first hike in 4Q despite recent improving economic indicators. Commentary from Fed governors continues to stress hike will be data dependent and Chair Janet Yellen noted in late May an increase could come this year if the US economy improves. Futures also imply a very gradual increase in rates with just three additional 25 bp hikes priced in for 2016. This compares to an average 200 bp increase in the 12m following the initial move in the last three rate cycles (2004: 200 bp, 1999: 175 bp. 1993: 250 bp).

How to Hedge: Buy GSRHRATE. This basket includes 12 Financials

across Discount Brokers, Regional Banks and Trust Banks that each have 20%+ EPS upside to normalized Fed Funds (300 bp) driven by higher net interest margins and money market fee waivers rolling off. While our Financial analysts estimate an initial hike is already priced in for most stocks in GSRHRATE, this baskel is still likely to be sensitive to any pull-forward in rate expectations as EPS estimates will likely be revised higher. The basket has been more correlated with treasury yields (2YR, 5YR, 10YR) than either the XLF (Financials) or SKX (Banks Index) over the last year.

Market reform: A key pillar in the China re-railing story. The CSI 300 IChina A-shares) has irnere than doubled over the tam. year (+149%) and the HSCEI (China H-shares( is up 33%. A-shares have continued to outpace hi-shares in 2015 with the CS! 300 up 50% and the HSCEI up 16%. China bulls locus on the potential (Or the Shanghai and Sheranen stock connects io increase foreign inflows and enhance the liquidity profile required by key benchmark providers like MSC! and FTSE. Both index providers have cited that market accessibility concerns need to be resolved before including A-shares into benChrnaikS. Bears cite China’s debt buildup. NPLs and a slower China growth trajectory.

Investors have been using options for access. Higher demand for upside calls (long with a hedge) rather than downside puts (fade the rally) has led to a rarity in the options Space. HSCEI and HSI are now the Only major global indices with negative skew, which all else equal. implies that put options are ‘fading inexpensive relative to calls. The term structure of implied volatility is also sharply downward sloping implying longer-dated options are trading at a discount to shorter-daled options.

To position for upside with limited loss: Buy the HSCEI 105/125% call spread expiring December 30, 2015 for 4% (potential 5:1 payout). The December expiration benefits from the downward sloping term structure and potentially captures the Shenzhen-Hong Kong Connect expected to launch tater this year. The trade takes advantage of elevated call Skew by selling a deep otm call to cheapen the structure.

To hedge the China rally: Take advantage of inverted skew. For investors who caught the rally or want to position for downside we like buying the HSCEI 90% put expiring December 30, 2015 for 3.9%.

As for the real question: is Goldman truly hedging its positions or, as is almost always the case, merely looking for willing counterparties to its own prop exposure. Because if Goldman is happy to take the other side of these trades, then S&P 2400 may be just over the horizon.