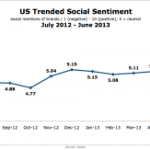 Brands’ Social Mentions Gradually Turning Positive in the US

Brand conversations are on the rise on Twitter, and Twitter users who mention brands have an increasingly amplified voice. While the social space no doubt heightens the opportunity for good PR, bad news can also spread like wildfire. (Recent research suggests that bad customer service interactions are more likely to be shared on social media than good experiences.) New data from Adobe sheds light on social sentiment trends, suggesting that brands are gradually being mentioned in a more positive light in the US.

Adobe’s sentiment analysis ranks social mentions from 1 (negative) to 10 (positive), with 5 being neutral. Looking at the past year, Adobe shows that average social sentiment in the US (measured across Facebook, Twitter, YouTube, Blogs, and Tumblr) has climbed from a neutral score of 5 in July 2012 to a slightly positive score of 5.28 last month. While that doesn’t seem like a steep climb, the trend has been more pronounced in the past 9 months or so, after sentiment hit a low of 4.77 in October.

The average sentiment over that timespan was 5.07 in the US. How does that compare to other English-speaking countries? It’s slightly above the average sentiment in Australia (5.04), but significantly below Canada (5.24) and the UK (5.36). In fact, the UK hit its highest point last month, with a reading of 5.75.

Expanding the analysis to 38 countries, 6 major industries, and 800 companies, Adobe shows that average social sentiment is highest in the travel and hospitality (5.37) and automotive (5.36) industries, with retail (5.33) close behind. Social sentiment for the high tech (5.25), media and entertainment (5.19) and financial services (5.11) industries lag somewhat, but remain slightly positive on the whole.

A recent study from Ogilvy suggests that positive brand mentions on social tend to relate most often to features and cost.