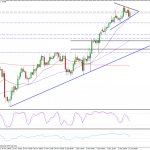 The euro is trading lower against the dollar on Thursday, following seven consecutive wining sessions. The rally over the last seven days has been particularly aggressive, so this could just be a temporary consolidation in the pair rather than a bigger retracement. This is what the 4-hour chart suggests, given the triangle that has formed over the last 24 hours or so. This is typically a bullish continuation pattern, so we could see a breakout to the upside in the next 24 hours. If we do, the the initial target would be the previous highs of 1.3810, followed by this year’s highs around 1.3830. Based on the size of the formation, the conservative target would then be around 1.3850, with the more aggressive target being around 1.4050. To hit this though, the pair will have to break through the descending trend line, dating back to 15 July 2008, which I believe will provide significant resistance. If, on the other hand the pair breaks below the triangle, it would suggest we’re about to see a bigger retracement, in which case the 50 and 61.8 fib levels will be key. The 61.8, particularly, given that it coincides with both the ascending trend line and a previous level of resistance.

Sterling is looking bullish against the dollar again this morning following the brief retracement yesterday. The pair found strong support around the 61.8 fib level, which also coincided with the descending trend line, that dates back to 5 August 2009, that it broke above a couple of weeks ago, and the ascending trend line, that dates back to 12 November. From here the pair rebounded higher quite aggressively, which highlights the fact that traders are still bullish on the pair, despite the recent loss of momentum. The next target for the pair should now be 10 December highs around 1.6465, although resistance could be found along the way around 1.6441, previous level of resistance. If the pair fails to break above the 20-period SMA, we could see further pressure on the trend lines and 61.8 fib, but I don’t expect a break below here. Not before next week’s FOMC decision which could be very bullish for the dollar.

The dollar is looking bullish against the yen this morning, after finding support from the 61.8 fib level yesterday. The pair has clearly lost some momentum though and could simply be going through another short term consolidation period before it continues its ascent. In the longer term I remain bullish with this pair but at the moment, it looks to be stuck in an ascending triangle consolidation pattern, which may take another week or so to play out. For now, we could see another test of the top of the ascending triangle around 103.35. That said, if the pair turns lower in the coming days, and breaks below the 61.8 fib level, we could instead see a double top form, with the neckline being around 101.70. A break of this should then prompt a move back towards 100, based on the size of the double top, which would coincide with the 50% retracement of the move from 8 October lows to 10 December highs.