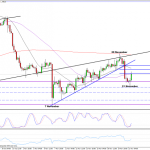 We’re seeing a bit of a recovery in the euro today, following an aggressive sell-off yesterday. This came as a result of a rumour that circulated around negative deposit rates being used as stimulus in the future over other rate cuts. Talk of further stimulus so quickly after the last rate cut is very bearish for the euro, which is why we saw such an aggressive sell-off. Technically speaking, this enabled the pair to break below the ascending wedge that has been created over the last couple of weeks. The setup was already bearish, given that is came following a major sell-off from 25 October, but this just provided the catalyst for the break. We are seeing it pare some of these losses today, but I don’t expect that upward move to be sustained. Potential bearish reversal points around here could be found around 1.3488, 50% retracement of the move from yesterday’s highs to today’s lows and previous level of support, and 1.3509, 61.8% retracement of the same move. That is if we haven’t already seen the full correction with the pair having found resistance from a combination of the 50-period SMA on the 4-hour chart and the 38.2 fib level. If we do see a move lower from here, the initial target will be 1.3292, 7 November lows, with support being found along the way around 1.3389, 1.3358 and 1.3317. A more aggressive target going forward will be 1.30, based on the size of the move from 25 October highs to 7 November lows. Only a break back into/above the wedge would suggest to me that the trend has potentially changed.

Sterling is continuing to push higher against the dollar today, although it’s continuing to struggle around 1.6150. A break above here should prompt a move towards 1.62 and 1.6233, where it could find resistance from the top of the channel. The channel that the pair has been trading in since 18 September could be viewed as a flag formation, which is a bullish continuation pattern. However, I’m not overly convinced at this stage, given that we’ve seen a break below the ascending trend line, which suggests traders are not as bullish as they once were. If we see a break above the top of the channel, this will confirm the bullish continuation, prompting a move towards 1.6360, descending trend line, dating back to 5 August 2009. On the 4-hour chart we’re seeing something similar, although in this case, it is an ascending channel. However, the move it nowhere near as aggressive as the lead up to it was. Again, if we see a break above the channel, we should see a lot of pressure on the top of the channel from the daily chart, whereas a break below should prompt a move back towards 1.60.

The dollar has rallied aggressively against the dollar today following a brief period of consolidation. The pair broke above the flag formation on Tuesday before coming back to test the top of the flag as a new level of support. Having got confirmation of the original break the pair rallied aggressively higher taking out a couple of resistance levels along the way. The pair is now finding strong resistance around 100.85, a previous level of resistance. This could now prompt another period of consolidation before a move towards the 8 July highs around 101.53, or given the strength of the rally so far, we may be due a larger retracement. If we do, then key levels of support could be found around 100.60, 100.42 and 100. Below here we have the key fib levels including 99.65, also a previous resistance, 99.26 and 98.87.