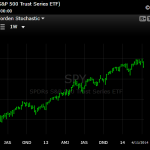 How bad have markets been recently? If you are watching them day by day or week by week recently, they seem severe. Is this reaction because we have been spoiled and expect markets to always go up? Or, is something else going on?

This chart shows SPY from January 2012 to the present. Each bar represents a week of activity:

Looking at the chart does not indicate anything out of the ordinary. The recent price pattern is consistent with those experienced over much of the last two-plus years — at least thus far.

The chart should dispel the notion that something out of the ordinary is occurring. Recent performance is in line with at least five other comparable dips during this period. But, should we assure ourselves in this fashion?

It may be comforting to look and say that nothing extraordinary has happened in the last couple of weeks. Thus far that is visually correct, at least for prices. The previous dips are comforting to the extent that they were brief interruptions in an upward trend. What if the current downtrend continues this week? What if it is the beginning of a new, longer-term trend downward? What if it is the early beginnings of bear market?

Will we look back at this point and say it was merely a dip? Or will we look back and recognize it as the beginning of a bear market? Or will it just be a “normal” 10 – 15% correction (pundits always use the term “normal” to describe most downturns — after all, they don’t want you running away).

No one knows where markets will go from here, although here are a few troubling issues that should be considered:

The Federal Reserve has announced and begun executing a taper strategy. I think they will reverse that, but what if they don’t?
Volume has been dropping since August of last year. Markets may be running out of buyers, at least at these levels.
International trends are working against equity markets. Ukraine is heating up again. Iran, Syria and other spots around the world represent threats to the US. Additionally, attacks on the dollar to dethrone it as the world’s currency are quietly underway.
China’s growth has slowed dramatically and there is the real possibility that much of their capital has been squandered in centrally-planned investments that will not survive a slowdown.
More troublesome than anything, however, is the dismal economic conditions. There has been no recovery, at least nothing that approaches a traditional one. All efforts have failed and now seem ineffective.
Stimuli are not forever. When they don’t work, the tendency is to double-down. That has happened, arguably several times. Resources are finite, although fiat currency is not. At some point the entire stimulus effort will be (if it has not already been) seen as a colossal failure that has seriously harmed the future of the country.
Inflation is inevitable if current policies continue. Economic and/or governmental collapse is possible if they don’t.

A man can drive himself crazy pondering these and other negatives. For those old enough to remember investing when it used to be investing, it seemed so much simpler. Put some money in stocks or mutual funds and forget about it. Let American ingenuity and a growing economy increase your savings/investment while you concentrated on more important things like your family and job. Th0se days are long gone in the casino that we call markets.

Buy and hold seems to be crazy in light of the economic and financial dangers. Participating in markets at all is riskier than most would like. But, government financial repression has made it impossible to get returns elsewhere. Recently, equity markets have been the only game in town. Some day, likely sooner than most of us anticipate, the stock market bubble will burst.

There may be more upside from here, but I believe it is undersized relative to the potential downside.

If you want or need to participate in today’s markets, don’t use the techniques and strategies that worked for your father and grandfather. Today, investing is no longer investing but short-term trading. In markets like these, investors are going to get fleeced.

Within the last fourteen years, there have been two major market corrections, both of which saw drops of 55% from their highs. That, or more, is the potential for what lies ahead. For those who went through these markets, it was not enjoyable. A friend told me that he, fortunately, was talked into staying in these markets and recovering his losses. His “advisers” told him to stay. They will do so again next time, but next time the government is unlikely to be able to re-inflate the stock market bubble.

To put into perspective how lucky he was, it took 25 years for the Dow Jones to recover to its pre-crash highs after the Great Depression. Likewise, the Dow hit an intraday high of 1,000 in 1962 but never closed above 1,000 until about twenty years later.

You must decide whether these markets are for you, but if you do you had better be very agile and ready to run when the time comes. Unfortunately, most of us believe that we can get out before the disaster. History shows that thinking to be mostly wrong.

Whether recent market behavior proves to be merely a dip in the chart is almost irrelevant. The country and financial markets are nearing what could very well be an existential event.

Do not be investing like your father or grandfather. Markets today are more like casinos than a way to invest in American growth. Unfortunately, the Federal Reserve has made it impossible to go elsewhere other than your mattress.