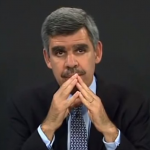 ROSENBERG: Something changed in the market and it’s significant

TOM LEE: History shows that we’re not doomed for a bear market

This is ‘the danger’

The US stock markets spent most of Tuesday in the green before tumbling into the close.

“Today’s reversal in US stocks was particularly worrisome because it came after a seemingly perfect sequential setup: (i) Stabilization in Asian stock markets (outside of China); (ii) monetary policy stimulus by the PBoC, China’s central bank; (iii) a strong bounce in Europe; and (iv) a solid start and mid-session for US markets,” Allianz’s Mohamed El-Erian said on Facebook.

“But all this mattered little into the close as the Dow embarked on its record point reversal to the downside,” he said.

After Monday’s 588 point plunge in the Dow, Wall Street pros everywhere reassured their clients that it would pay to stay bullish. Some even believed markets could be up Tuesday because Monday was so bad.

“After vertiginous falls by many equity markets yesterday, and dramatic moves in many currency pairs, with the yen and euro ‘winning’ while China and commodity-sensitive currencies were beaten up, the ‘traditional’ Tuesday reaction would be for a bit of a bounce all round,” Societe Generale’s Kit Juckes wrote early Tuesday.

But that didn’t happen, even with the four positive points that El-Erian identified.

“Inevitably, this reversal will cause further technical damage to an-already tentative market,” El-Erian added. “It will raise doubts about the strength of the “BTD” (buy the dip) appetite. And it will also erode the faith that market participants have in the power of central banks to repress volatility.”

(If you want to read more about eroded faith in central banks, read what David Rosenberg and Gerard Minack are telling clients.)

“Lacking an external stabilizer, the market will need to search harder for its internal stabilizer – most probably through an inevitably volatile price discovery process,” El-Erian said.

For now, the least we can do is wait and see what happens next.