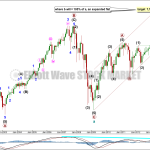 Price continues to move higher, but the breakout is unconvincing. A new high above 6,865.86 would be required to provide confirmation of this trend change at intermediate degree.

The target for upwards movement is now 7,345.

This main wave count expects that FTSE remains within a huge super cycle expanded flat correction. My alternate idea would be more in line with my bullish main wave count for the S&P 500: the FTSE may have ended its correction at 3,460.71 in March 2009 and that may be where a new bull market began.

If this upwards movement is a zigzag for a cycle degree b wave then it is incomplete. At 7,103.67 or above cycle wave b would reach 105% the length of cycle wave a. This would see the flat an expanded flat which is the most common type, and movement above this point is reasonably likely.

Intermediate wave (4) may have ended a few days ago as a running barrier triangle with the B-D trend line essentially flat.

If this wave count holds (if price does not move below 6,478.16) then the target is at 7,345 where intermediate wave (5) would reach equality with the widest part of the triangle.

A new high above the end of minor wave D within the triangle at 6,865.86 would confirm that the triangle is over and intermediate wave (5) is underway.

Normally when triangles are complete the next movement begins with a sharp thrust. This has not happened so far and so this week I have some doubt about whether or not intermediate wave (4) is over. If a new low below 6,478.16 is seen in the next week then I would expect that intermediate wave (4) may be continuing sideways as a combination.