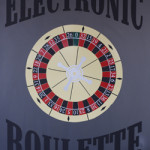 Responding to Labour’s accusations that they are fuelling poverty, betting shop owners said they were merely offering working class equivalent of City trading.

Bookie Roy Hobbs said: “People who go to private school get to gamble on the stock exchange, where they shout at monitors, take cocaine in the bogs and then enjoy lobster dinners with Estonian prostitutes.

“This is the closest that unshaven smelly men can get to throwing billions into the lap of the gods with little regard for the consequences.

“That gun in the corner might look like a shambling wreck in a pleather jacket, but in his mind he’s Michael Douglas.”

Roy Hobbs added: “In any case I’m not sure there’s anything we can do to make betting here less appealing. Our premises already look like Hell’s waiting room, with withered smoking men outside like sentinels of death.

“We could leave a dead goat in the middle of the room, even then I don’t think it’d put our punters off. The main thing is that their wives aren’t here.”