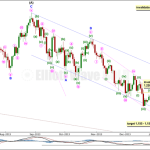 Last analysis expected a fourth wave correction may have been complete. A
trend channel was provided for confirmation. We did not get confirmation and
price moved higher, remaining just below the invalidation point.

The wave count is mostly the same.

Gold is still within a large fourth wave correction at primary wave degree
which is incomplete. To see a full explanation of my reasoning for expecting
that primary wave 4 is not over and is continuing see this.

Primary wave 2 was a rare running flat correction, and was a deep 68% correction
of primary wave 1. In order to show alternation in structure primary wave 4
may be a zigzag, double zigzag, combination, triangle or even an expanded or
regular flat. We can rule out a zigzag because the first wave subdivides as
a three. This still leaves several structural possibilities.

Downwards movement has breached the parallel channel drawn about intermediate
wave (B) downwards, and it has found support at the next trend line.

Primary wave 4 may not move into primary wave 1 price territory. This wave
count is invalidated with movement above 1,532.90.

Minuette wave (iv) has moved higher, and we still do not have trend channel
confirmation that it is over. There is almost no room left for upwards movement,
and so it must be over if this wave count is correct.

At the daily chart level this main hourly wave count has a better look than
the alternate below.

I want to see movement below the parallel channel containing minuette wave
(iv) to have confidence that it is over. A full hourly candlestick below the
channel and not touching the lower trend line would provide a clear channel
breach.

While price remains within this channel the alternate hourly wave count below
must be considered.

At 1,155 minuette wave (v) would reach equality in length with minuette wave
(iii). This gives us a smaller $4 target zone.

Minuette wave (iv) may not move into minuette wave (i) price territory. This
wave count is invalidated with movement above 1,220.65.

If this main hourly wave count is invalidated then the alternate hourly wave
count below should be used.

Within an ending diagonal all the subwaves must subdivide as zigzags. Diagonals
are the only structures where you will see a third wave labeled as a zigzag.

This wave count eliminates the problem of proportions within minuette wave
(iii); this downwards movement subdivides nicely as a zigzag.

Within minuette wave (iv) subminuette wave a is remarkably short, and this
reduces the probability of this wave count slightly. However, a bigger problem
is within the structure of subminuette wave c: micro wave 3 must subdivide
as an impulse and the only way this works is to see submicro wave (1) ending
at 1,201.74 so that submicro wave (3) is not the shortest wave. If submicro
wave (1) ends there then on the five minute chart it does not subdivide into
a five wave structure. I will allow for the possibility that my analysis of
this piece of movement may be wrong.

Within the diagonal minuette wave (iv) may not move beyond the end of minuette
wave (ii). This wave count is invalidated with movement above 1,252.12.

It is also possible that primary wave 4 may continue as a regular contracting
(or barrier) triangle.

A new low below 1,180.40 is also possible for this wave count if the triangle
is a running triangle, as about 40% of triangles are.

The final intermediate wave (E) upwards may not move above the end of intermediate
wave (C) for both a contracting and barrier triangle. E waves most commonly
end short of the A-C trend line.

All five subwaves of a triangle must divide into corrective structures. If
this next upwards movement subdivides as a zigzag which does not make a new
high above 1,438.83 then this alternate would be correct.

Triangles take up time and move price sideways. If primary wave 4 unfolds
as a triangle then I would expect it to last months rather than weeks.