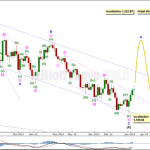 It is at this point the hourly wave counts diverge.

Gold is still within a large fourth wave correction at primary wave degree
which is incomplete. To see a full explanation of my reasoning for expecting
that primary wave 4 is not over and is continuing see this.

Movement above 1,277.97 would provide confirmation that primary wave 4 is
not over. At that stage upwards movement could not be a fourth wave correction
within primary wave 5 because it would be in its first wave price territory,
and the downwards movement labeled intermediate wave (X) would be confirmed
as a completed three wave structure.

Primary wave 2 was a rare running flat correction, and was a deep 68% correction
of primary wave 1. In order to show alternation in structure primary wave 4
may be a zigzag, double zigzag, combination, triangle or even an expanded or
regular flat. We can rule out a zigzag because the first wave subdivides as
a three. This still leaves several structural possibilities.

Primary wave 4 is less likely to be a flat correction because if it were it
would be a regular flat. These have similar behaviour and a similar look to
running flats, and so there would be little structural alternation between
primary waves 2 and 4.

Draw a parallel channel about minor wave C downwards (pink channel) with the
first trend line from the highs labeled minute waves ii to iv, then place a
parallel copy upon the low labeled minute wave iii. When this channel is clearly
breached by upwards movement with a full daily candlestick above the channel
and not touching the upper trend line, then we shall have trend channel confirmation
that minor wave C is complete and the next wave is underway.

If intermediate wave (Y) is a flat correction then within it minor wave B
must retrace a minimum of 90% the length of minor wave A, and it may make a
new low below 1,180.84. This invalidation point will only apply while minor
wave A is incomplete.

Primary wave 4 may not move into primary wave 1 price territory. This wave
count is invalidated with movement above 1,532.90.

Within minute wave a of the zigzag the structure can only be an impulse or
a leading diagonal. The most likely structure is an impulse.

Upwards movement labeled subminuette wave i is very difficult to analyse.
The only thing for certain is this movement is over because the sharp spike
labeled subminuette wave ii retraced almost all of this slow upwards movement.
Subminuette wave i can only be one of two structures, an impulse or a leading
diagonal. It does not look at all like a diagonal and does not subdivide as
one. It does subdivide as an impulse, although within it there is a problem
of proportion between minuscule waves 2 and 4 within the middle of the third
wave.

Ratios within subminuette wave i are: there is no Fibonacci ratio between
micro waves 3 and 1, and micro wave 5 is 0.46 short of equality with micro
wave 1.

At 1,272 subminuette wave iii would reach 1.618 the length of subminuette
wave i. This target may be reached within a day.

If the flat correction of minor wave A is an expanded flat then minute wave
b would reach down to 1,177.46 or below. A new low below 1,180.84 is entirely
possible for this wave count.

Minute wave a lasted three days. I would expect minute wave b to be a minimum
duration of three days, and maybe five days. B waves are often more time consuming.

If price moves below 1,213.56 within the next 24 hours then I would use this
alternate and the second alternate below.

If minor wave A is subdividing as a three wave structure then it may also
be unfolding as a double combination or double zigzag. Within the double the
first structure labeled minute wave w is a zigzag.

Minute wave x should be a three in the opposite direction. X waves do not
have a minimum requirement in relation to the length of W waves, and there
is no minimum price point to the downside. X waves also have no maximum length,
and minute wave x may make a new low below the start of minute wave w at 1,180.84.

X waves are most commonly zigzags (almost all the time, this is very common),
but they may subdivide into any corrective structure.

X waves are most often more brief than W, Y and Z waves. Minute wave w lasted
three days, and minute wave x would be expected to be over within two or three
days.

It is also possible that primary wave 4 may continue as a regular contracting
(or barrier) triangle.

Intermediate wave (C) must unfold as either a single or double zigzag. Within
it no second wave correction, nor wave B of the zigzag, may move beyond the
start of the first wave or A wave. This wave count is invalidated with movement
below 1,180.84.

The final intermediate wave (E) upwards may not move above the end of intermediate
wave (C) for both a contracting and barrier triangle. E waves most commonly
end short of the A-C trend line.

All five subwaves of a triangle must divide into corrective structures. If
this next upwards movement subdivides as a zigzag which does not make a new
high above 1,438.83 then this alternate would be correct.

Triangles take up time and move price sideways. If primary wave 4 unfolds
as a triangle then I would expect it to last months rather than weeks.