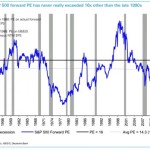 And when stock returns outpace earnings growth, then the price-earnings (PE) multiple is expanding.

Forecasting what the PE will do is crucial since it is a huge driver of returns. But it can be tricky because it represents the premium investors are willing to pay for profits, and it’s always fluctuating (see chart).

“What’s the most common investor question?,” asked Morgan Stanley’s Adam Parker today. “It’s about the market multiple. The consensus view remains that there is less multiple expansion in front of us than behind us.”

But as much as the PE tends to revert to its mean, it also trends away from its mean for lengthy periods of time.

Parker, who expects the S&P 500 to hit 2,014 by the end of next year, thinks the PE could trend higher, giving stocks a nice boost.

“The consensus view is also, however, that few risks appear imminent to derail this market rally, and therefore everyone is worried about the same thing, which is that no one is worried about anything,” added Parker. “We think the multiple can still expand, which may actually be the most contrarian bull part of our call.”

“While stock indexes like the S&P 500 have hit all-time highs, the stocks are not currently valued at the levels that have marked the end of bull markets in the past,” said LPL Financial’s Jeff Kleintop in his 2014 outlook.

“The PE for S&P 500 companies using EPS over the past four quarters stands at about 16 as 2013 draws to a close,” noted Kleintop. “This is below the 17 – 18 PE where every secular and cyclical bull market has ended since WWII (with the exception of the late 1990s that ended much higher). We expect the PE for the S&P 500 to end 2014 around 16.5 — a level last seen in 2005 and 2006. A rise of half a point seems reasonable based upon last year’s experience as risks receded and our expectation for growth to improve in the coming year.”

However, all of these forecasts are based on the assumption that the U.S. economy stays out of recession.

“Alternatively, if economic growth falters and earnings do not move higher, we would expect a modest drop in the PE and a decline for the stock market, despite more bond buying from the Fed,” said Kleintop.

SEE ALSO:
The Stock Market Is Not Doomed To Crash — Here’s The Full Argument Why