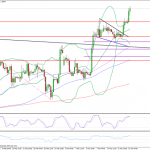 The euro is looking very bullish against the dollar right now and yesterday’s move only added to that. On the daily chart below the pair has just broken above the upper bollinger again following a similar move last week. This is generally viewed as quite a bullish signal. It also came following a brief pull back to the 38.2 fib level, which in itself I believe is very bullish. These shallow retracements suggest traders are very bullish on the pair and view these small corrections as a good entry level. The 4-hour chart looks equally bullish after the pair also closed above the upper bollinger yesterday. Unlike on the daily chart, this came following a tight squeeze in the bands which in my view makes the move even more bullish. The pair us currently finding resistance around 1.3950, but I expect it to push through here relatively quickly. The next major resistance should come around 1.3985, the 161.8% expansion level. The pair has respected both the 100% and 123.6% expansion levels perfectly so I see no reason why we won’t see the same again. This level also falls just before 1.40, which is a massive psychological level that the pair hasn’t traded above since the end of October 2011.

Sterling is looking quite bullish against the greenback this morning, although I would like to see further confirmation of this after the pair formed a double top over the last month. The pair failed to close below the neckline which is bullish, but I’ve seen it plenty of times before that the first attempt fails, we get a brief retracement and then a successful break on the second attempt. With that in mind, I’d initially like to see a close above 1.6676, the middle bollinger band and 50% retracement of the move from last Friday’s highs to yesterday’s lows, which should prompt a move through the 61.8 fib level. Given that we’re seeing a tightening of the bollinger bands, a break through the middle band could prompt a strong push to break higher. A break above the upper bollinger could then prompt an aggressive move higher, beyond 17 February highs.

We’ve seen a retracement in this pair so far this week, but this doesn’t change my bullish view. In fact, I expect to see the levels it’s currently trading around to be viewed as good buying opportunities. The pair has pulled back to the 50 fib level, this month’s low to high, and bounced nicely off the 20-day SMA (middle bollinger band). This strikes me as quite bullish, but to confirm this, I’d like to see confirmation of a reversal of this week’s trend. We haven’t seen this yet on the 4-hour chart, with even a doji, or even better a bullish engulfing pattern. In fact, the pair has just broken through the 50-period SMA, which, if it closes below here, may suggest the correction isn’t over. If we do see this, further support could be found around 102.30, from the descending trend line that the pair broke above on 6 March. If this holds up, it would be seen as confirmation of the initial break and be very bullish. Below here we have the 200-period SMA and the 61.8 fib level.