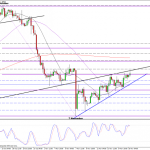 Sterling is trading pretty flat against the dollar so far today. The pair is looking a lot more bullish in recent days, after looking quite bearish at times last week. It broke significantly below the neckline of the double top formation before recovering late on to close back above. The inability to close below here was a clear sign that the market remains quite bullish and the rally since has confirmed this. The next test for the pair will be whether it can break above the descending trend line, dating back to 5 August 2009. It has failed to break above here quite a few times recently, which highlights how big a level it is for the pair. If it does continue to edge higher from here towards that level, it should find resistance along the way around 1.6150, previous level of support, followed by 1.6207, previous resistance. Alternatively, we could see it edge lower from here, which the current daily candle suggests we will. Today’s candle currently looks like a doji, which typically indicates a reversal. That said, it’s worth noting that this only applies to the close candle. All it tells us at this stage is that there’s some indecision in the markets at this level, which may suggest the recent bullish move has run out of steam. If that’s the case and the pair does move lower from here, support should be found around 1.6115, 1.61, 1.6050 and 1.60.

The recent rally in the dollar yen pair finally ran out of steam this morning, having just broken, and closed above, 100 on Friday. The sell-off in the pair does not change my longer term bullish view for the pair, but it may prompt a brief correction in the coming days before the rally continues. The pair is already finding support this morning around 100, a key psychological level. Also providing support around here is the 20-period SMA on the 4-hour chart. Below here it should find further support around 99.66 and 99.40, previous levels of resistance, followed by 99.30, 50-period SMA on the 4-hour chart, and 99, previous level of resistance and the 50% retracement of the move from 7 November lows to 15 November highs. If the pair turns higher today, having potentially failed to break significantly below 100, resistance should be found around 100.42, Friday’s highs, followed by 100.60 and 100.85, both previous levels of resistance.