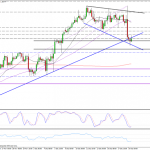 The FOMC announcement did not disappoint last night, creating huge surges in volatility, followed broadly by dollar gains. The euro was one of the biggest losers against the dollar last night, closing more than 80 pips lower on the day following the initial period of excessive volatility. Despite this negative session for the euro, we have seen signs that it won’t be enough to bring an abrupt end to the rally in the pair, which is largely due to the Fed’s commitment to keep interest rates low well beyond the time when the 6.5% unemployment rate is reached. This acted to somewhat offset the impacts of the taper. As you can see on the charts below, the pair failed to break, or close, below the ascending trend line, which dates back to 21 November, or the descending trend line, which dates back to 11 December. On top of this, additional support was found, and is still being found today, from the 50 fib level, of the move from 3 December lows to 18 December highs, and the 20-day SMA (middle bollinger band). If these continue to hold it would suggest that traders are still bullish on the pair. If the pair breaks below here further support should be found around 1.3633, from the 61.8 fib level. A break of this level would suggest that, temporarily at least, the momentum has swung in the favour of the dollar, prompting a bigger move back towards 1.3550, 50% retracement of the move from 7 November lows to 18 December highs.

Sterling is one of the few currencies that actually fared well against the dollar following the FOMC decision. In fact, not only did it not end lower on the day, it never even took out the daily lows during the period of high volatility. What it did do though was record new highs for the year. With this in mind, the pair is still looking bullish, especially when you also consider the response to the massive support level, around 1.6213. Here both the descending trend line, which dates back to 28 April 2011, and the 61.8 fib level provided significant support, prompting an aggressive push higher. A close below here would have suggested that the pair had entered a new downtrend. Going forward the longer term picture is continuing to look bullish. The pair has broken back above the neckline of the double top, which I now expect to act as support. Resistance above here should now be found around 1.64, 1.6417, 1.6436 and 1.6465.

The yen was clearly one of the worst performing currencies against the dollar following the FOMC decision. This isn’t exactly surprising given the overall performance of the yen recently. What this did for the charts though is provide the technical breakout that we had been waiting for on the daily chart. The ascending trend line, which dates back to 22 November lows, and the resistance level, around 103.35, had created an ascending triangle on the daily chart. This is typically a bullish pattern, regardless of the prevailing trend. The break above here has allowed the pair to reach new five year highs, which could now prompt a move towards 104.91, previous level of support. This is also close to the next key psychological level around 105. The next major target for the pair will be around 106.80, where the descending trend line, which dates back to August 1998, should provide significant resistance. In the mean time, we could see the dollar pare some of yesterday’s gains, with support initially being found around 103.90, previous resistance. So far the pair has failed to close below here which may suggest that all we’re seeing here is a brief pause before the continuation of an aggressive move higher. If the pair breaks below here, further support should be found around 103.42, 103.35 (top of ascending triangle) and 103.20.