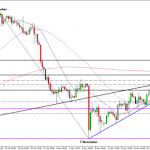 The euro is continuing to edge higher on Tuesday, although we’re still seeing no sign that it is going to break back above the ascending trend line that it broke below earlier this month. As a result, I’m still bearish in the long run, but that doesn’t mean it won’t continue to grind higher for a couple more days yet before it breaks lower. Yesterday’s candle, a spinning top, could be viewed as quite bearish given that it typically indicates a reversal. But the fact that it closed higher suggests to me that there could me a little more to come before we do see a continuation of the down trend. As it stands, we’re still seeing some resistance in the pair around 1.3523, with the ascending trend line above here, around 1.3531 being the next level of resistance. If we do see a daily close back above here, it would suggest that the market is not as bearish as it currently appears, prompting a move towards 1.3563, 50% retracement of the move from 25 October highs to 7 November lows. Resistance should also be found along the way around 1.3538, 50-day SMA. However, if the pair does not break back above here, which I don’t expect it to, we should see another attempt at a break below the ascending trend line, dating back to 7 November lows, with support being found along the way around 1.35, 1.3483, 20-period SMA on the 4-hour chart, and 1.3475, ascending trend line. The next level of support below here should then come around 1.3450, previous level of support and resistance.

Sterling is looking a little more bearish this morning, after finding strong resistance yesterday around 1.6150. Yesterday’s candle is a nice spinning top, which typically indicates a trend reversal, especially when it closes below its opening price, as it has here. Another red candle today that closes at least two third of the way down Friday’s candle would confirm the more bearish short term outlook for sterling, as it would result in a evening star formation. If we do see a bearish move in the pair, it should find support around 1.6087, 20-period SMA on the 4-hour chart, 1.6080, yesterday’s low, 1.6060, 200-period SMA on the 4-hour chart and 20-day SMA, 1.6047, previous support and 50-day SMA, and 1.6034, 50-period SMA on the 4-hour chart. If on the other hand we see a continuation of the move higher, resistance should be found around 1.6150, yesterday’s high. Above here, further resistance should be found around 1.6207 and 1.6224, descending trend line, dating back to August 2011.

The correction in the dollar yen pair, following the break above the descending trend line earlier this month, is continuing this morning. The longer term bias in the market certainly appears to be more bullish in this pair, following the break of the massive resistance level, which means all we’re seeing now is a brief retracement before the continuation of the uptrend. With that in mind, some key support levels for the pair will be the 38.2, 50 and 61.8 fib levels, the move from 7 November lows to 15 November highs, as well as 99.13, a previous level of resistance. Of these, the most likely reversal point appears to be 99, 50 fib level and a key level of resistance previously. That said, the pair has already found support this morning around 99.66, previous level of resistance. If this prompts a move higher, the next target will be 100.42, Friday’s highs, followed by 100.60, 100.85 and 101.50.