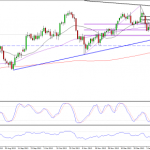 Last weeks candle has only added to the negative outlook for the euro, having closed near its lows, barely rallied above its opening level and closed below the 20-week SMA for the first time since the start of July last year. The daily chart is looking similarly bearish following a very negative end to the week. The pair is finding support today around 1.3522, the 61.8% retracement of the move from 7 November lows to 27 December highs. The ascending trend line, which dates back to 6 September, is also acting as support here. However, I expect this to only be a temporary support level. It may have recovered from an earlier sell-off, leaving today’s candle looking like a hammer at the moment, but this means nothing until the candle closes this evening. What’s more important is that the pair is continuing to make lower highs and lower lows and doesn’t appear to be losing momentum in the process. We may see a small recovery in the pair today following Friday’s sell off, but I expect the pair to find significant resistance around 1.3570, from the 20-week SMA. This is also a previous level of support and resistance. Above here further resistance could be found around 1.3615 from the 50-day SMA. This is also a previous level of support and resistance. If we see a break below the trend line, this would further confirm the bearish outlook for the pair, with the next move being 1.34.

Sterling was given a huge boost on Friday, following the release of some very strong UK data. The move prompted a more than 100 pip rally against the dollar, before the pair settled to close up 70 pips. The pair had been looking a little weaker up until this point, having broken below the ascending trend line, which dates back to 9 July. That said, I think this was only ever going to be short term weakness in the pair, which may explain why the rally was so aggressive. The pair had already been finding support from the 50-day SMA, which also coincided with the 38.2 fib level. This suggests that traders were simply waiting to buy the dips in the pair, as opposed to becoming more bearish. The result of this rally was a morning star formation on the daily chart, after the pair closed above the mid-point of the body of Wednesday’s candle. This is a very bullish setup, especially when it falls on such a key support level. If we see a close back above the descending trend line, or even better a break of the 10 January highs, of 1.6515, this would confirm the continuation of the move higher in my opinion. The next target would then be this year’s highs of 1.6602.

The dollar is continuing to look a little bearish against the yen despite the rally in the pair early last week. There are signs that the pair may be turning more bullish. For example, last week’s spinning top candle could indicate a bullish trend reversal, after the pair failed to close below 103.70, a previous level of resistance. However, confirmation of this is required, with this week’s candle closing above the half way mark of the real body of the candle from two weeks ago. This would form a morning star which is a much more bullish setup. For now, the pair is continuing to look bearish, with the price action on the daily chart still making lower highs and lower lows. If we see a break below the 13 January lows in the coming days, that would confirm the downtrend continuation, while a break above 104.91, previous resistance, would add further weight to the bullish trend reversal argument. The former looks the most likely at this stage with the pair having broken below the 20-day SMA and failed to break hold back above it last week. That said, looking back at the trend, this may not be the most reliable indicator. Previously, during the uptrend, the pair repeatedly spent days below the 20-day SMA before breaking back above and continuing the push higher. The one thing we can see that’s different on this occasion though is that on this occasion it failed to hold back above here.