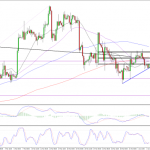 The euro was looking a little more bullish against the dollar at the start of the week, following the bounce of the 50-day SMA and 50 fib level, 3 February lows to 13 March highs. We’d also seen divergence at this level which made it look even more bullish. However, a failure to break previous highs followed by a bearish engulfing pattern on the daily chart suggests the pull back in the pair is not over. Should we see further declines in the pair today, support could be found around the 50-day SMA again, around 1.3734 and the 50 fib level. That said, the lack of upward momentum following the bounce off these previously suggests to me that these levels will be broken, potentially prompting a move back to the 61.8 fib level, around 1.3663. That would mean the pair making new lows which would make it appear even more bearish. This level will then be key, with a break of it suggesting to pull back it going to be much bigger than initially thought and potentially even suggesting that this isn’t a correction, but a reversal of the longer term trend.

N.B. The ECB rate decision (12.45pm GMT) and press conference (1.30pm GMT) today is likely to prompt significant volatility in this pair, if previous meetings are anything to go by. The average trading range of the pair on the day of the ECB meetings so far this year has been 125 pips.

Sterling is potentially starting to look more bullish against the dollar following the correction that has taken place since 17 Febuary, although I’m still not convinced at this stage. Following the bounce off the trend line and 61.8 fib level, 5 February lows to 17 February highs, a couple of weeks ago, the pair rallied for six consecutive days, driving back above the 20 and 50-day SMAs. However, the pair was clearly lacking much upward momentum during this time and failed to break previous highs. The result means more lower highs for the pair and even though the sell-off since hasn’t been in any way aggressive, it suggests to me that traders still aren’t too bullish at these levels. The 4-hour chart shows that a descending triangle has formed during the consolidation period of the last couple of days, as well as a head and shoulders pattern. The neckline was not broken on the first attempt but given how bearish these triangle formations can be, I wouldn’t be surprised to see it broken on the second attempt, with the next major support below here coming from the 50-day SMA and ascending trend line, around 1.6536. A break of this would be very bearish.

The medium term outlook for the dollar against the yen is looking very bullish right now, having broken through a few key resistance levels to trade at two-month highs. However, having rallied strongly for the last five consecutive days, the pair appears to be losing a little momentum. This could mean that we’re about to see a correction, or if the rally is very strong, just a consolidation. We haven’t yet seen a crossover on the stochastic on the daily chart despite it trading in overbought territory, which would be the bearish signal, but today’s price action may be the first hint that it’s coming. What we are seeing is potential bearish divergence on the 4-hour chart, with the price action making higher highs and the stochastic making lower highs in overbought territory. The MACD also looks like crossing over and at these levels, this has previously been a good signal that a correction is about to happen. The only question now is how big the correction will be. The first big test is likely to be yesterday’s lows of 103.58, assuming we don’t just see consolidation again. A break of this level would point to a bigger correction, with further key levels of support the coming around 103.43, previous resistance, 103.16, 38.2% retracement of the move from 27 March lows to 3 April highs, and 102.89, 50 fib level and previous support.