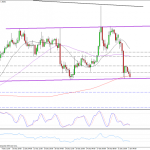 The euro is looking pretty weak against the dollar at the moment, having broken through two ascending trend lines in the last few weeks, with the first being confirmed at the end of December when the pair failed to break back above the trend line. For confirmation of the trend reversal, we’ll need to see a break below the neckline of the double top that has formed over the last month, around 1.3630. This provided significant support yesterday but we’re seeing it tested again today. Also providing support at this level is the 50-day SMA and the 200-period SMA on the 4-hour chart, so a break of all of these levels would strongly suggest there’s been a change of bias in the markets. Based on the size of the double top, this should prompt a move towards 1.3450, a previous level of support and resistance. This is also, roughly, the 38.2% retracement of the move from 9 July lows to 27 December highs. Support should be found along the way around 1.3580, 1.3525 and 1.3490. If the pair fails to break below here, resistance should be found around 1.3650, 1.3675, 1.3710 and 1.3725.

Sterling is also looking a little bearish against the dollar this morning. Yesterday’s sell-off in the pair resulted in a bearish engulfing pattern being formed on the daily chart. Has we also seen a close below 1.6450, previous level of resistance, which also coincides with the ascending trend line, that dates back to 17 December lows, I would be much more bearish. As it is, I think we need to see further confirmation before determining that the bias in the market has changed from bullish to bearish. There is a clear battle going on around 1.6450,as highlighted on the 4-hour chart, but it’s not clear at this stage who has the upper hand, the bulls or the bears. The 50-period SMA on the 4-hour chart and the 61.8 fib level are continuing to provide support below, while the 50 fib level – a previous level of support – is providing significant resistance above. If we see a close outside of this range, it should give us a big clue about what the bias in the market actually is. If we see a break lower, further support should be found around 1.6360, where the 20-day SMA intersects the ascending trend line which dates back to 12 November. Below here further support should be found around 1.6340, descending trend line dating back to 5 August 2009, and 1.6310, previous support. A break higher on the other hand would suggest the bias is still bullish in the market, prompting a move back towards yesterday’s highs around 1.66.

The dollar has been looking a little weak against the yen over the past couple of days. In fact, the last few candles have been very bearish, starting with a spinning top on 30 December, followed by a hanging man, with yesterday’s candle turning it into a bearish engulfing pattern. The bearish move came following the break of the double top on the 4-hour chart, which prompted a move back towards 104.30, closing the gap that opened on 26 December. However, the pair is still in a clearly defined uptrend in the longer term, and a pretty aggressive uptrend at that. The pair did temporarily break below the ascending trend line, which dates back to 7 November, but a failure to close below here on both the 4-hour and daily charts suggests the market remains bullish. If we see a close below the trend line, then we could see a much bigger retracement, following nine consecutive winning weeks. I’m not convinced that we will see that at this stage though. I think we could see the pair continue to push towards 106.50, where the descending trend line which dates back to August 1998 should provide significant resistance. This seems like a more likely reversal point. Of course that is just a guess at this stage. If we see a close below 103.98, it would result in a bearish engulfing pattern on the weekly chart, which would be very bearish.