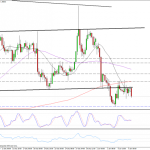 The euro is continuing to look bearish against the dollar this morning, having failed to close back above the neckline of the double top for a second consecutive day. The could now be viewed as confirmation of last week’s break, prompting a move back towards 1.3450, based on the size of the formation. It’s also worth noting that the 200-day SMA also played its part in providing significant resistance for the pair having succeeded once again in preventing the pair closing above it. This is another bearish signal. Finally, on the 4-hour chart, assuming we don’t see a significant rally before the candle closes, we’re about to see the formation of an evening star, yet another bearish signal. With this in mind, the bearish outlook for the pair hasn’t really changed from yesterday. We do now have another support level around 1.3595, yesterday’s low, but below here further support should be found around 1.3570, 1.3525, 1.3490 and finally, 1.3450.

The outlook for the cable pair hasn’t changed from yesterday, despite it opening today below the ascending trend line. The reason I say this is because we haven’t seen a significant break of this trend line, instead the pair closed yesterday pretty much on it. As a result, this morning it opened below which as far as I’m concerned doesn’t count as a significant break. On top of that, all of the other indicators remain bullish which I believe is more important. For example, yesterday’s candle was the second spinning top candle in a row, which given the high trading volumes, still suggests there’s a large number of traders protecting this support level. As far as I’m concerned, it’s only a matter of time until the bears give up. Although, this is just a hunch, we still need to see evidence of this. For example, with today’s candle completing a variation of a morning star formation with the previous three candles, preferably closing above the trend line in the process. We also haven’t seen a break of the 20-day SMA, which has been a key level of support in recent days, or the 61.8 fib level. I think to begin with we need to see a break of 1.6432. This has been a significant resistance level in recent days so psychologically speaking, a break above here could be viewed as confirmation that the market is bullish again. In fact, when combined with the ascending trend line from 6 January lows, this could be seen as an ascending triangle, another bullish formation.

The dollar was starting to look a little bearish against the yen yesterday, but this turned out to be just a temporary retracement in an otherwise aggressive rally. The pair broke below the ascending trend line on Monday and appeared to be struggling to break back above it yesterday. It’s having no such problems today though and with Monday’s highs now broken, the pair is looking much more bullish again. There were signs that the retracement was only temporary on Monday when it failed to break below the 20-day SMA and the 50 fib level. However the failure to break back above the trend line had to be considered, especially following last week’s hanging man candle on the weekly chart, the first negative week in ten. It seems the rally may be set to continue, for now at least, although there are some massive resistance levels coming up. First up is the 61.8 fib level, of the move from 22 June 2007 highs to 31 October 2011 lows, around 105.58. Above here is the descending trend line, which dates back to August 1998, around 106.50 and the 200-month SMA around 107.25. I can’t see the pair breaking through all of these massive levels before we see a much larger retracement.