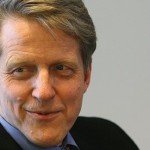 One of the winners of this year’s Nobel prize in economics has warned that sharp rises in equity and property prices could lead to a financial bubble.

Robert Shiller, who won the award with Eugene Fama and Lars Peter Hansen for research into market prices and asset bubbles, pinpointed the US stock market and Brazilian property market as areas of concern.

“I am not yet sounding the alarm. But in many countries stock exchanges are at a high level and prices have risen sharply in some property markets,” Shiller told Der Spiegel magazine. “That could end badly,” he said.

“I am most worried about the boom in the US stock market. Also because our economy is still weak and vulnerable,” he said, describing the financial and technology sectors as overvalued.

He had also examined the increase in house prices in Rio de Janeiro and São Paulo in Brazil over the past five years.

“There, I felt a bit like in the US of 2004,” he said, adding he was hearing arguments about investment opportunities and a growing middle class that he had heard in the US in about 2000.

The collapse of the US housing market helped trigger the 2008-09 global financial crisis.

“Bubbles look like this. And the world is still very vulnerable to a bubble,” he said.

Bubbles are created when investors do not recognise when rising asset prices get detached from underlying fundamentals.

The US stock market has risen steadily for the past two months, with the Dow Jones and S&P 500 indices hitting a series of record highs.