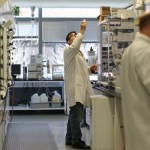 View photo.Short interest among leading biotechs and emerging pharmaceuticals increased nearly all across the board between February 13 and February 27.

Here, Benzinga takes a quick look at how the stocks have fared recently and what analysts expects from them, followed by a glance at short interest moves in other leading biotech stocks.

After rising more than 21 percent in the previous period, the number of shares sold short in BioMarin grew another 10.6 percent to total more than 4.43 million – less than 3 percent of the total float. The days to cover remained more than three.

BioMarin’s offerings include Vimizim, Naglazyme and Kuvan. The San Rafael, California-based company now has a market cap of more than $18 billion. Its long-term earnings per share growth forecast is about 25 percent, while its revenue prospects impressed analysts during the two-week period.

Seven of the 21 analysts covering the stock rated it a Strong Buy and 11 more also recommended buying shares. The mean price target is less than 4 percent higher than the current share price.

However, the consensus target will be a new multiyear high. The company share price climbed more than 6 percent during the two-week short interest period, and more than 7 percent since.

The stock is up more than 26 percent since the beginning of the year. BioMarin has outperformed competitor Amicus Therapeutics and the broader markets over the past six months.

The short interest gain of about 15 percent in this biopharmaceutical company brought the total to more than 12.78 million shares. This was more than 1 percent of the float, as well as the greatest number of shares shorted since last October.

It would take less than three days to cover all short positions.

The manufacturer of therapies for treating cancer and immune-inflammatory related diseases has a market cap of almost $95 billion. An approval by European regulators pushed shares toward an all-time high in February.

The company’s long-term EPS growth forecast is more than 25 percent.

All but four of the 27 analysts surveyed recommended buying shares, with 11 of them rating the stock a Strong Buy. A move from the current share price to the mean price target would be a gain of more than 14 percent.

Here too, the consensus target would be a new multiyear high for the stock.

The company shares increased more than 5 percent during the short interest period, while the S&P 500 was essentially flat.

Still, Celgene stock has retreated more than 2 percent since the settlement date and it has underperformed the other two biotech stocks over the past six months.

Short interest in the company swelled more than 9 percent to total more than 3.43 million shares – more than 1 percent of the total float. This was much less than half the 52-week peak in short interest from last September.

The days to cover were less than three.

Vertex manufactures small molecule drugs for the treatment of serious diseases such as hepatitis C and cystic fibrosis, and the company has a market cap of almost $30 billion. Its long-term earnings per share growth forecast is almost 30 percent, but its operating margin and return on equity are in the red.

The consensus recommendation of the analysts surveyed has been to buy shares of Vertex for at least the past three months. They see some head room for shares as their mean price target is more than 8 percent higher than the current share price. The consensus target would be a new multiyear high as well.

The stock rose about 5 percent during the two-week period, crossing the 50-day moving average, and another 3 percent since then. Vertex has not only outperformed larger competitors Bristol-Myers Squibb and Merck over the past six months, but Amgen and the broader markets as well.

See also: The 4 Biggest Biotech Stocks In The Market

Short interest in Incyte was about the same at the beginning and end of the two-week period. Short sellers appeared to lose interest in Intrexon though.

At the time of writing, the author had no position in the aforementioned equities.

Keep up with the latest breaking news and trading ideas by following Benzinga on Twitter.