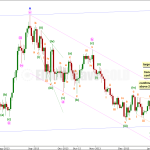 Last analysis of Silver on 31st December, 2013 expected a trend change and upwards movement. This is exactly what has happened so far. If price moves above 20.489 the new upwards trend would be confirmed.

Price movement above 20.489 would provide confidence in this trend change. At that stage upwards movement could not be a second wave correction within the final fifth wave down of minuette wave (v), and so minuette wave (v) would have to be over.

Further upwards movement above the pink parallel channel would provide more confidence in this trend change. A clear channel breach with a full daily candlestick above this channel and not touching the upper trend line would provide this confirmation.

Minute wave iii shows an increase in upwards momentum beyond that seen for minute wave i, confirming this is a third wave unfolding.

At 22.197 minute wave iii would reach 1.618 the length of minute wave i. I would expect this target to be about three to five days away.