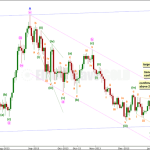 Last analysis of Silver on 31st December, 2013 expected a trend change and
upwards movement. This is exactly what has happened so far. If price moves
above 20.489 the new upwards trend would be confirmed.

Minor wave B is now a complete zigzag, which is within a bigger zigzag trending
upwards one degree higher for intermediate wave (B).

Price movement above 20.489 would provide confidence in this trend change.
At that stage upwards movement could not be a second wave correction within
the final fifth wave down of minuette wave (v), and so minuette wave (v) would
have to be over.

Further upwards movement above the pink parallel channel would provide more
confidence in this trend change. A clear channel breach with a full daily candlestick
above this channel and not touching the upper trend line would provide this
confirmation.

At 25.49 minor wave C would reach equality in length with minor wave A. Minor
wave C should find resistance at the upper edge of the big blue channel about
this large zigzag.

Minor wave B ended in 88 days, just one short of a Fibonacci 89. Minor wave
C should last about 34 to 89 days, depending upon what structure it takes.

Minor wave C must subdivide into a five wave structure, either an ending diagonal
or an impulse. An ending diagonal would be more time consuming. An impulse
would be faster and is more likely as it is a more common structure.

Within the new upwards trend no second wave correction may move beyond the
start of its first wave. This wave count is invalidated with movement below
18.585.

Minute wave iii shows an increase in upwards momentum beyond that seen for
minute wave i, confirming this is a third wave unfolding.

At 22.197 minute wave iii would reach 1.618 the length of minute wave i. I
would expect this target to be about three to five days away.

When this channel is clearly breached by subsequent downwards movement that
shall provide first indication that minuette wave (iii) is over and minuette
wave (iv) is underway. I would not expect minuette wave (iv) to last longer
than a day and it should not show on the daily chart as a red candlestick.
Minuette wave (iv) may not move into minuette wave (i) price territory. This
wave count is invalidated with movement below 19.714.