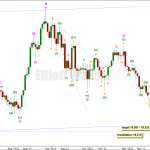 Last week movement below 20.512 invalidated the main wave count and confirmed the alternate. At that stage the analysis for the alternate wave count expected a continuation of downwards movement.

I have just the one wave count for you this week.

Minor wave B is an incomplete zigzag.

Minor wave B may not move beyond the start of minor wave A. This wave count is invalidated with movement below 18.215.

I am expecting minuette wave (v) to most likely breach the lower edge of this channel.