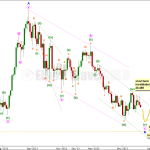 Last analysis of Silver expected downwards movement towards a mid term target at 18.999. Price has moved lower. The target has not yet been reached, and the structure is incomplete. The target remains the same.

The narrow channel drawn about minute wave c is drawn using Elliott’s second technique. Draw the first trend line from the ends of minuette waves (ii) to (iv), then place a parallel copy upon the end of minuette wave (iii). Downwards movement may end close to the mid line of this channel.

At 18.999 minuette wave (v) would reach equality with minuette wave (i). This would see the fifth wave truncated, which is possible after a strong extended third wave. Equality with the first wave is the most common ratio for a fifth wave, so that is what I am using for this target calculation.

Within minuette wave (v) no second wave correction may move beyond the start of its first wave. This wave count is invalidated with movement above 20.489.

Within minute wave v there is now a completed five wave structure downwards, and a three wave structure upwards. This is most likely subminuette waves i and ii now complete.

Ratios within subminuette wave i are: micro wave 3 is just 0.029 short of 4.236 the length of micro wave 1, and micro wave 5 has no Fibonacci ratio to either micro waves 3 or 1.

Within subminuette wave ii there is no Fibonacci ratio between micro waves A and C.

Within subminuette wave iii no second wave correction may move beyond the start of its first wave. This wave count is invalidated with movement above 20.279.

I would expect the target at 18.999 to be reached within two weeks.