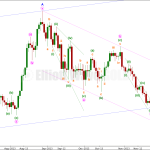 Last week’s analysis of Silver expected more downwards movement towards a target at 18.591 to 18.353. Price did move lower but has failed to reach the target. Downwards movement may have ended at 19.595, 1.004 short of the target zone.

Minor wave B is now a complete zigzag.

Minute wave c is now a complete impulse. Within minute wave c there are no adequate Fibonacci ratios between minuette waves (i), (iii) and (v).

The narrow channel drawn about minute wave c is drawn using Elliott’s first technique. Draw the first trend line from the ends of minuette waves (i) to (iii), then place a parallel copy upon the end of minuette wave (ii). This channel is now clearly breached by upwards movement which indicates minute wave c is over and the next wave has begun. The upper edge of the channel is now providing support.

Within minor wave C no second wave correction may move beyond the start of its first wave. This wave count is invalidated with movement below 19.595.

At 26.50 minor wave C would reach equality in length with minor wave A.

What is very clear on this hourly chart is the three wave structure for recent downwards movement. If price does not break below 19.595 then I would expect a third wave upwards to begin from here.

The channel about minuette waves (i) and (ii) is an acceleration channel. I would expect minuette wave (iii) to break through the upper edge of this channel. At that stage I would be confident that a third wave is underway.