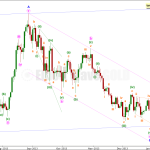 Price movement above 20.489 would provide confidence in this trend change.

Further upwards movement above the pink parallel channel would provide more confidence in this trend change.