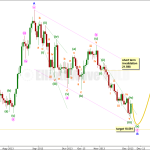 Last analysis of Silver was invalidated with downwards movement below 19.595. Members of Elliott Wave Gold were aware of a new alternate for Gold, which also works for Silver. But I did not have time to update the Silver wave count.

The narrow channel drawn about minute wave c is drawn using Elliott’s first technique. Draw the first trend line from the ends of minuette waves (i) to (iii), then place a parallel copy upon the end of minuette wave (ii). Minuette wave (iv) has breached this channel; sometimes fourth waves do this. When they do we redraw the channel using Elliott’s second technique when they are over. I would not expect to see too much more of a breach.

When minuette wave (iv) is over then one final downwards wave for minuette wave (v) would be required to complete the entire structure for minor wave B.

For this wave count to be correct it is important to check the subdivisions of subminuette wave iv. This portion of the hourly chart shows this correction.

This is the key to the current wave count, and the reason why I expect downwards movement is incomplete.

Within the correction for minuette wave (iv) the structure is an incomplete expanded flat.

Within a flat a general guideline would be the deeper the B wave, the longer the C wave. This C wave is very long indeed which fits the overall behaviour of flat corrections.

Minuette wave (iv) may not move into minuette wave (i) price territory. This wave count is invalidated with movement above 21.598.