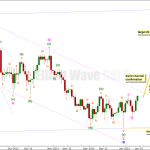 Last analysis of Silver expected more upwards movement which is what we have seen. The short term target at 20.415 for the end of a third wave was almost met, and the third wave ended just 0.047 short of the target.

The wave count remains mostly the same. I will adjust the degree of labeling within the most recent movement and the target to better fit with the bigger picture.

Price movement above 20.489 would provide confidence in this trend change. At that stage upwards movement could not be a second wave correction within the final fifth wave down of minuette wave (v), and so minuette wave (v) would have to be over.

Further upwards movement above the pink parallel channel would provide more confidence in this trend change. A clear channel breach with a full daily candlestick above this channel and not touching the upper trend line would provide this confirmation.

Within minor wave C at 23.971 minute wave iii would reach 2.618 the length of minute wave i. This higher target fits with a more common expectation of an extended third wave, and so the final fifth wave may reach equality with the first.

Within minute wave iii I would expect to see its second and fourth waves, minuette waves (ii) and (iv), show as red candlesticks on the daily chart.

I would expect more upwards movement to complete minuette wave (i) in one or two days.

Minuette wave (ii) should show up on the daily chart as two or three red candlesticks.

Minuette wave (ii) may not move beyond the start of minuette wave (i). This wave count is invalidated with movement below 19.332.