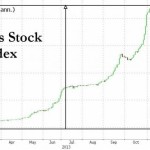 For generating the greatest “wealth effect” and highest return of any global stock market in the world in 2013, the Caracas stock exchange, which closed the year at the ripe level of 2.7 million, is getting surprisingly little attention or love (maybe because unlike other countries, here unpleasant inflation from currency debasement is a coincident indicator resulting in such things as a shortage of toilet paper). Because after all isn’t it an economist and monetarist’s dream to achieve a 480% return in one year based on simply printing money?

Supposedly, the answer is no.

But for whatever reason, since nobody talks about the massively successful Venezuelan stock market, which in the modern era is second only to the even more “successful” Zimbabwe stock market, it bears noting that earlier today, quietly, the Caracas stock market announced it would proceed with a 1000 for 1 stock, er, index split.

We assume this happened because according to the “specialized technical report prepared by experts in the area of market organization”, an index trading at 2,737 appears more attractive to a toilet-paper deprived population than its identical version which however has risen to 2,737,000.

Of course, we give the post-split index a few months before it hits its previous absolute record level. At which point it will be rinse repeat. However, at least the local
“experts” will constantly keep removing zeroes from the benchmark number thereby giving the impression that all is well.

Come to think of it, both Japan and the US could be next when the glorious socialist policies of Venezuela trickle out from the oil-rich Latin American country…

From the Caracas Stock Exchange, google translated. Be careful the Bolsa website may have a virus in it:

The Caracas Stock Exchange , based on a specialized technical report prepared by experts in the area of market organization , announced to brokers, investors and the general public a modification of the indicators of the stock market , which comes into effect from today January 2, 2014 , as follows :

The modification was performed on the multiplier factor ” 1.000″ , in order to reduce proportionally reflected in indicators of six ( 6) whole numbers to at least three ( 3) whole numbers with two ( 2) decimal values.

The formula has the following parameters :

a. Daily compounding of each of the shares comprising the index basket .

b . Capital base, calculated and corrected based on the capitalization of the index basket 1997 , known as the base year .

c . A constant number used to identify the units or points indicator (Value Today 1 before 1000 )

The changes are effective as of January 2, 2014 . However, they were announced to the general public daily from 20 December 2013 until its entry into force on the first day of the new year.