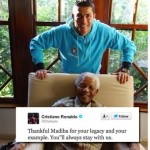 Who was Nelson mandela? An anti-apartheid revolutionary, an ex-south Africa president, a war prisoner, a philanthropist, or a politician?

Madiba, as he was known by his followers, served as the president for South Africa during the 1990s. He fought apartheid and will be remembered as one of the most iconic leaders in the world. The whole world mourned his death, with his fans and celebrities all around the world expressing their sorrow on losing their beloved leader.

“What are the sentiments of masses on Nelson Mandela’s death”?

• Analysis of social networks clearly showed that users on Facebook, GooglePlus, and Twitter posted over 250 posts each about Nelson Mandela’s death. Users were also active on GoogleBlogs and Yahoo about his tragic death.

How posts on Nelson Mandela were trending across Social Media:

As can be seen from the analysis below, people remembered their leader on Christmas as compared to any other day. Users on Twitter, Facebook and Googleplus were posting the most about Nelson Mandela during Christmas.

Who are the Social media Influencers with respect to Nelson Mandela?