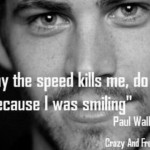 The world watched him with awed eyes when he raced his way past racers in Fast and the Furious series. The unfortunate irony is, he himself died in a car accident. The world mourned when the news of Paul Walker’s death broke out. Even fellow actor, Vin Diesel couldn’t hold on to his tears. The news of Paul Walker’s death is being termed as one of the saddest news of 2013. Interestingly, there were millions of people who expressed their sadness on social media. Paul Walker was the top trend on Twitter for two days even after the actor’s death.

“What are the sentiments of masses on Paul Walker’s death”?

• The number of positive and negative posts about Paul Walker’s death were almost the same, which clearly shows that the actor’s fans were wishing for his soul to rest in peace and were extremely sad at the same time.

• Analysis of social networks clearly showed that users on Twitter topped the charts when it came to grieving about the actor’s death. Facebook and Google Plus users were also active about this heart breaking news.

How posts on Paul Walker’s death were trending across Social Media:

Social media saw millions of people posting about the actors death during the first week of December but the number of posts eventually decreased as days passed by. But as can be seen from the analysis below, posts on Paul Walker’s death again got viral on 24th December.

Who are the Social media Influencers with respect to Paul Walker?

• Suppose, if a brand wants to associate with Paul Walker, then it should do a quick sentiment analysis about him and understand the public sentiment towards him. If the sentiment is positive then it will be extremely beneficial to associate with him. Hence, EaseSocial can be a powerful medium that simplifies marketing research.