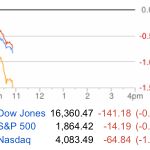 The markets are sliding early in the U.S. trading session.

Shares of Amazon.com are weighing on the tech-heavy Nasdaq. On Thursday afternoon, the company announced quarterly financial results that were largely in line with expectations.

Other big losers in the Nasdaq include Netflix, Expedia, and Priceline.

Share of Ford are down 3.2% after the company announced disappointing earnings.

Earlier today, we learned that the Markit U.S. services PMI slipped to 54.2 in April from 55.3 in March. Economists estimates the headline would climb to 55.5.

“In the services sector, there are worrying signs for future momentum,” said Markit’s Chris Williamson. “Levels of outstanding business fell at the fastest rate since last August, and firms’ optimism about the year ahead also waned.”

The University of Michigan’s consumer confidence index jumped to 84.1 in April from 80.0 in March. This was the highest reading since July 2013.

SEE ALSO:
Why A New Skyscraper In Saudi Arabia Could Mean Doom For The Global Economy