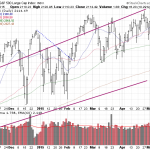 Indexes gapped up mildly in the U.S., tried to rally a bit and failed, and then did little from there.  The S&P 500 gained 0.29% and the NASDAQ 0.23%.  A lot of eyes will be set on Friday’s employment data; economists forecast a 225,000 increase in April non-farm payrolls, and a one-tenth decline in the unemployment rate to 5.4 percent..   Factory orders for March showed a gain of 2.1 percent, the biggest increase in eight months and above expectations of a 1.9 percent increase.  There were also dovish Fed comments that helped the action:

Chicago Fed’s Charles Evans said that hiking interest rates does not seem appropriate until next year due to the weak first quarter.

Data point:  Of the S&P 500 members that have already released results this season, 73 percent beat profit projections and 49 percent topped sales estimates. Analysts have tempered their predictions for a corporate profit slump, now projecting a first-quarter drop of 0.4 percent, compared with April 17 calls for a 4.3 percent decline.

There has been a decent 2 day bounce on the S&P 500 but really this index has not made much progress in a few months.

Still negative on the NYSE McClellan Oscillator which is a negative.

Financials are one area starting to stick out to the upside – see banking giant JPMorgan (JPM) as an example.

Shake Shack (SHAK) has been very impressive since its IPO!

This move in Chinese stocks that we’ve highlighted the past month continues – see Youku (YOKU) and Sina (SINA).