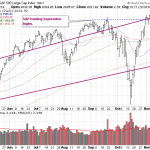 Much like yesterday some early morning red numbers led to dip buyers coming in to buy as we had an unusually quiet employment report day.  Usually there is much more volatility off the jobs data – Friday the S&P 500 gained 0.03% and the NASDAQ dropped 0.13%. The Labor Department reported payrolls increased by 214,000 last month, less than the 231,000 anticipated, and the jobless rate fell to 5.8%.

Indexes have spent this week consolidation the large gains of the prior 2 weeks.

The NYSE McClellan Oscillator remains at elevated levels.  Bulls should be comfortable until we start to see a divergence in the future where NYMO goes negative while the market holds up.  That has usually led to mini corrections in the past.

Another day = another day of gains for Alibaba (BABA).

First Solar (FSLR) led losses on the S&P 500, falling a day after the maker of solar panels said it would not create a publicly traded yield company to own and operate its own power plants, as rivals including NRG Energy have done.  Profit slipped in the third quarter.

Monster Beverage (MNST) was the S&P’s best performer, with the maker of energy drinks rising after reporting quarterly profits that topped estimates.

Sears Holdings (SHLD) soared on plans to explore the sale and leaseback of 200 to 300 stores.

Have a good weekend and we’ll see you back here Monday.