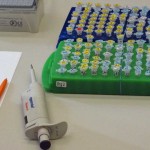 View gallery.(Wikimedia Commons)There is probably a bubble in biotech stocks.
In a big note on published on Friday, analysts at Credit Suisse ask if we’re in a biotech bubble, and answer that no, it’s not a bubble, merely a “new era” for biotech stocks. Which is exactly what it sounds like when something is a bubble. Credit Suisse hinges its argument on what it calls the evolution from “Biotech 1.0” to “Biotech 2.0.”

As BI’s Akin Oyedele outlined, Biotech 1.0 was the “hopes and dreams model,” where companies sold the prospect of big medical breakthroughs; Biotech 2.0 is about being able to combine these breakthroughs with growth and profitability.

But the entire idea that we’re looking at some sort of paradigmatic shift from a 1.0 to 2.0 era just reeks of bubble talk and justification for valuations and expectations that are outrageous.

Now, Credit Suisse acknowledges that we might be in a bubble, noting that valuations are high and biotech indexes have had just extraordinary bull runs in the last several years. Except the firm notes that they “cherry pick” some stats about the sector for “shock value,” sort of negating the desired effect of acknowledging the bubble and making their analysis more level-headed as a consequence of having considered alternatives.

Here are the stats:

So to summarize our view so far, yes biotech has massively outperformed over the last few years, but so has the fundamental outlook for the sector … So why do we view Domain Domination as the key sensitivity for the whole sector? Our logic (or arguably lack of it!) is: 1. Sector performance is still determined by generalist flows … and notwithstanding our argument about forward (2017-2019) PE’s for biotech being lower than S&P 500, justifying upside on their own, it’s clear to us that the market is looking for some way of judging post 2020 growth. This is an exercise in judging intangibles / early / high-risk high-reward pipeline assets … 2. The reason that “Domain Domination” is so important is that it is not just a large cap issue — if the industry (both Pharma and Biotech) also really think Domain Domination is real (and some clearly do judging by recent investor presentations) then partnerships with SMID Biotech – at really favorable economics to the junior partner will increase. Just saying….

And so in one line: It makes total sense if you agree with us.

For the road, here are three charts from the note that show the stunning performance of biotechs.

The sector has been the best performer for 5 years in a row, which has never happened before.