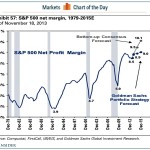 The stock market is at an all-time high.

And gains have been bolstered by earnings, which in turn have benefited from historically high corporate profit margins.

The bears believe these margins are doomed to fall back to a long-term mean. They argue that weaker demand and rising rates among other things will cause sharp margin contraction.

The bulls believe that margins are undergoing a structural change. Increased overseas exposure, balance sheet deleveraging, and technological improvements have margins in a long-term upswing.

This latter argument is supported by industry analysts via their bottom-up consensus forecasts.

As you can see in this chart from Goldman Sachs, Wall Street’s stock pickers only expect profit margins to move higher.