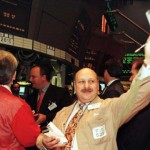 A trader on the floor of the New York Stock Exchange yells a trade at the opening bell February 13 in New York. In early trading, the Dow Jones Industrial average passed the 7,000 point for the first time.

The Sum Of All Stock Market Fears In One Epic Chart

CREDIT SUISSE: We Are Experiencing ‘Momentary Bliss’ In The Global Markets

And this has come with much more chatter about an increasing risk of a stock market crash.

But despite all of this talk, investors are just not buying it.

According to Citi’s Panic/Euphoria model, a weighted average of nine market indicators is sending a “clear warning sign of substantial complacency.”

According to the September reading of Yale’s not-so-closely followed Crash Confidence Index, both individual and institutional investors don’t see a crash coming within the next six months. In fact, this conviction is at its highest level since early 2007.

Confidence that there will be no stock market crash in the succeeding six months generally declined (though with a lot of ups and downs) over the years since 1989 until the stock market bottomed out in late 2002. Just after the terrorist attacks of September 11, 2001, Crash Confidence actually rose a little. But Crash Confidence reached its lowest point at 20.79% for institutional investors and 28.95% for individual investors as of November 2002. Crash confidence reached its all-time low, both for individual and institutional investors, in early 2009, just months after the Lehman crisis, reflecting the turmoil in the credit markets and the strong depression fears generated by that event, and is plausibly related to the very low stock market valuations then. The recovery of crash confidence starting in 2009 mirrors the strong recovery in the stock market.

None of this guarantees that a crash is coming. But this elevated level of complacency may explain at least some of the frothiness in the markets, and a reversal of sentiment could certainly exacerbate any selling.

From Yale’s School of Management

SEE ALSO:
19 Signs We’re In Some Sort Of A Bubble