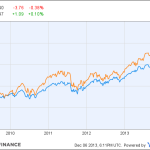 In most of the obvious ways, the stock market is closing out a very big year: The broad indexes are up more than 20% to reach new all-time highs, and the value of U.S. stocks has scarcely ever been greater relative to the size of the economy.

Yet in a few subtle but telling respects, the stock market is shrinking.

There are fewer publicly traded companies on American exchanges than at any time since at least 1990. A larger proportion of this narrower market falls into the “small-stock” category. And established companies have been aggressively pulling their shares off the market through buybacks.

Together, this amounts to a restricted supply of equities. To exaggerate slightly, there might not quite be “enough stock to go around” to meet a slowly rising level of investor demand. No doubt, this is at least a factor for the steady lift in share prices.

The total number of U.S. exchange-listed companies peaked near 8,800 in 1997 and has since sunk to 4,900 as of year-end 2012, according to data furnished by Strategas Group. The ranks of public companies declined slowly into the 2000 market peak and then entered a steep downtrend in the early- and mid-2000s. De-listings of failed uncompetitive technology stocks, another M&A surge in the mid-2000s and a relative shortage of initial stock offerings all contributed.

The enactment of the Sarbanes-Oxley Act in 2002, mandating enhanced disclosure and corporate-governance practices, raised the burden on being public. The growth of buyout funds devoted to buying out smaller companies also drove companies that might traditionally access the public markets to sell to a private buyer.

Still, the depopulation of smaller companies hasn’t really lifted the average market value of stocks in the lower reaches of the size spectrum. Money has flowed into large- and mid-cap stocks – and to the upper tier of those characterized as small-caps. But below the largest several-hundred issues is a wide expanse of stunted market values.

Russell Indexes chops the market into the large-cap Russell 1000, small-cap Russell 2000 and various other sub-sectors in June of each year. With the major indexes up some 80% since mid-2010, it would make sense for the average worth of, say, the 1000th-largest stock in the market to be up a good deal. Not so. The 1000th-largest stock (the smallest in the Russell 1000 at the time of the rebalancing) was $1.7 billion in 2010 and $1.8 billion this year.

(Small-cap indexes have outperformed fabulously for years, and indeed small stocks appear quite richly valued. But this is skewed by the influence of the “larger small-caps” that drive indexes such as the Russell 2000, in large part.)

The broad culling of the public-company list in recent years has left a number of benchmark indexes, and the exchange-traded funds that track them, under-populated.

The Wilshire 5000 is the oldest index that seeks to replicate the entire U.S. market. It never had exactly 5,000 stocks (that was just a marketing-driven estimate) but it often came close. Today, it contains just over 3,600 names.

And consider the Russell Micro-Cap index, which is tracked by the iShares Micro-Cap ETF (IWC). Designed to capture the littlest investable companies, it is meant to include the smallest 1,000 members of the Russell 2000 and the next 1,000 stocks smaller than those. But right now, only 528 additional companies qualify, leaving the index with 1,528 instead of the targeted 2,000 names.

Meantime, in a trend that’s run for years now, the biggest companies in the market continue to feast on their own shares. Ample cash flows, cheap debt and CEOs’ reluctance to invest in new projects or aggressive hiring have driven the buyback binge.

FactSet reports that S&P 500 companies repurchased an aggregate $415 billion the past four quarters, up 12% from a year earlier – due in part to Apple Inc.’s (AAPL) huge buyback commitment, but still a rate approaching the historic heights of the mid-2000s buyback mania.

While collectively companies issue almost as many shares via stock options and equity offerings as they buy back, among S&P 500 companies that have been in the index a few years, the number of outstanding shares has dropped by some 4% since early 2011.

All these ways to measure market shrinkage – fewer stocks, but more of them tilting toward the small end, and the siphoning of shares from public hands – have broad implications.

For one thing, they confirm that this bull market, powerful as it is, has yet to prompt the wild rush to sell stock to cash in on high prices. The IPO market has revived, but hasn’t quite reached a fevered state one might expect with stocks at historic highs.

The thinning supply of stocks also goes some distance toward explaining stagnant trading volumes in recent years. After the volume crescendo in the financial crisis liquidation phase, turnover rates have flat-lined. Though dollar volume looks healthier (due to the average share price being at a record high), the restricted amount of equity in public hands seems to make middling volume totals logical rather than some worrisome anomaly.

In theory, the fact that a large chunk of the market is made up of smallish, under-followed stocks largely ignored by a shrunken pool of traditional brokerage firms should represent an opportunity for opportunistic investors and upstart firms to surface good investment ideas. Of course, such predictions have been made far more often than they’ve been redeemed in recent years.