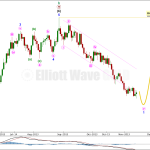 Last week’s analysis of US Oil expected more downwards movement towards a target at 88.83 to 87.82. Price has moved lower. The structure is incomplete and the target has not yet been reached. The wave count remains the same.

The bigger picture sees US Oil in a new downwards trend to last from one to several years. When I can see a clear five wave structure downwards on the daily chart I will have confidence in a trend change at cycle degree. So far the downwards structure for the first wave at minor degree is incomplete, and I cannot say that there is yet a clear five down.

Typical of commodities, the fifth wave is showing an overshoot of the parallel channel. When minute wave v completes minor wave 1 then I would expect upwards movement for several days to a couple of weeks or so for minor wave 2.

This two hourly chart shows the end of minor wave 1. There is now divergence between MACD and price; as price moves lower MACD moves higher. I would expect divergence to continue between the end of minuette waves (iii) and (v) to come.

When this channel is clearly breached by subsequent upwards movement that may be a first indication that minor wave 1 in it’s entirety is over and a time consuming deep second wave correction for minor wave 2 may have begun.

I will expect this target now to be reached within a few days, probably before next week’s analysis.

Within minuette wave (v) no second wave correction may move beyond the start of the first wave. This wave count is invalidated with movement above 95.21.