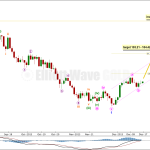 The wave count is the same.

The bigger picture sees US Oil in a new downwards trend to last from one to several years. There is now a clear five wave structure downwards on the daily chart, and I have some confidence in a trend change at cycle degree.

Minor wave 1 lasted 65 days. I would expect minor wave 2 to be around about a similar duration. It must subdivide into a clear three wave structure. It is most likely to end about the 0.618 Fibonacci ratio of minor wave 1 at 104.42. At 103.21 minute wave c would reach equality with minute wave a.

I have drawn a parallel channel about minor wave 2. I would expect minute wave c to find resistance at the upper edge of this channel.

So far minute wave c may be unfolding as an ending diagonal. The first upwards wave subdivides best as a zigzag, with a b wave triangle in the middle.