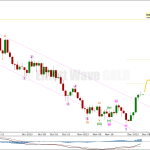 Last week’s analysis expected an end to a fourth wave correction within one or two days, to be followed by more downwards movement for a fifth wave.

There is now a clear five down on the daily chart. Upwards movement has breached a channel containing this impulse, and a second wave correction has begun.

The bigger picture sees US Oil in a new downwards trend to last from one to several years. There is now a clear five wave structure downwards on the daily chart, and I have some confidence in a trend change at cycle degree.

I have used Elliott’s first channeling technique to draw a parallel channel about this downwards impulse. Draw the first trend line from the lows labeled minute waves i to iii, then place a parallel copy upon the high labeled minute wave ii. This channel is now clearly breached by three daily candlesticks above, and they do not touch the upper trend line. This is an indication that minor wave 1 is now over and minor wave 2 is underway.

Minor wave 1 lasted 65 days. I would expect minor wave 2 to be around about a similar duration. It must subdivide into a clear three wave structure. It is most likely to end about the 0.618 Fibonacci ratio of minor wave 1 at 104.42.

So far the upwards structure looks like a completed five wave impulse, followed by a correction.

This may be minute wave a and now b unfolding. Or if we move the labeling down one degree, it may be only minuette wave (a) within a three wave structure for minute wave a.

There are over 13 possible corrective structures for minor wave 2. As more of the structure becomes clear over the next few weeks the labeling within it will change.

The most likely structure for minor wave 2 is a zigzag, and that is how I will label it to start. Within the zigzag minute wave b may not move beyond the start of minute wave a. This wave count is invalidated with movement below 91.76 in the short term.

If minor wave 2 continues as a flat, running triangle or combination it may make a new low below 91.76. But for now, after a five up labeled wave a, the next movement for wave b should not move below 91.76.