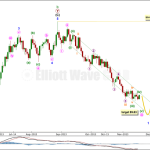 Last analysis of US Oil expected more downwards movement towards a target
at 87.82 to 88.72. Price has moved lower and the target has not been yet met,
the structure is incomplete.

Now there is more structure of this long downwards wave to analyse I am changing
the wave count within it. Two fourth wave triangles indicate it is much closer
to the end. The target has been recalculated.

The bigger picture sees US Oil in a new downwards trend to last from one to
several years. When I can see a clear five wave structure downwards on the
daily chart I will have confidence in a trend change at cycle degree. So far
the downwards structure for the first wave at minor degree is incomplete, and
I cannot say that there is yet a clear five down.

When minute wave iii is completed then I would expect about four days of upwards
movement for minute wave iv to end between 92.51 and 94.54 (within the price
range of the fourth wave of one lesser degree).

Thereafter, I would expect one relatively short fifth wave down to last about
three or four days, and be about 6.70 in length. That would complete the entire
structure for minor wave 1.

Minor wave 2 may not move beyond the start of minor wave 1. This wave count
is invalidated with movement above 112.24.

For both triangles MACD hovers about the zero line.

Overall I expect about two more weeks of downwards movement to end minor wave
1, with a final fourth wave correction during this time.