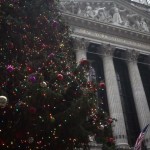 The exterior of the New York Stock Exchange is pictured with a Christmas tree in front of it in the Manhattan Borough of New York, December 23, 2014. U.S. stocks advanced on Tuesday, as the Dow climbed above the 18,000 mark for the first time in history and the S&P 500 set a new intraday record after an unexpectedly strong report on economic growth.

That Escalated Quickly
Washington can lead on criminal-justice reform

NEW YORK (Reuters) – U.S. stocks edged higher on Wednesday, with the Dow and S&P 500 at records and on track for a sixth straight daily advance as biotech stocks rallied and data pointed to improving economic conditions.

The day’s action was light, with many market participants already out for the Christmas holiday. The stock market will close three hours early on Wednesday and will be closed all of Thursday.

Equities have been on a hot streak of late, with the Dow closing above 18,000 for the first time ever on Tuesday. The S&P 500 is up 5.7 percent over the past six sessions and is on track for its 52nd record close of this year, the most since 1995 and the fourth best in history.

Those gains have come on central bank assurances and improving economic data, a trend that continued with jobless claims on Wednesday. Initial claims for state unemployment benefits dropped 9,000 to a seasonally adjusted 280,000, their fourth straight week of declines, and below the forecast of 290,000.

“Equities are heading towards the year-end finale in a good position,” said Terry Sandven, senior equity strategist at U.S. Bank Wealth Management in Minneapolis. “Fundamental and macro factors are supportive of higher equity prices, and clearly today if you look at the claims data which was generally in line with expectations, it still points toward an improving labor market.”

The day’s gains were broad, with seven of the 10 primary S&P 500 sectors rising on the day. The Nasdaq Biotech index .NBI was a particular standout, up 2.3 percent in a partial rebound from the drop of nearly 7 percent over the previous two sessions.

Both the Dow and S&P are on track for their sixth straight daily advance, the longest streak for the benchmark S&P since June.

Link this
Share this
Digg this
Email
Print
Reprints