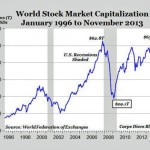 But what about the rest of the world?

According to new data from the World Federation of Exchanges (WFE), the combined market cap of the world’s major stock markets hit an all-time high in November.

As of the end of November, the total value of equities in those 58 major stock markets reached $63.4 trillion and set several milestones. First, global equity value reached a new all-time record high in November, and second, exceeded for the first time the previous all-time record monthly high of $62.8 trillion for global equity valuation in October 2007, several months before the global economic slowdown and financial crisis started, and caused global equity values to plummet by more than 50% (and by almost $34 trillion), from $62.8 trillion at the end of 2007 to only $29.1 trillion by early 2009…

Read more from Perry at AEI-Ideas.org.